The place to be for New Years in the Exumas!

The island has a population of only about a 100 people. Staniel Cay Yacht Club and the air strip on this island are owned and operated by the Water Makers company. They provide water making equipment and consumables for many of the islands. This is  good business to be in where you have hundreds of islands having to make their own water. Water is in much demand as fuel in these parts. They also operate flights from the island to Florida a few times per week. It is the quickest and most direct way to flight to Florida for about $260 per person.

New Friends Kim, Duane, Gayle, Scott with Roxane and Ed! From the boats, Zola and Priority.

We met some good friends here, Kim and Duane aboard Zola, thier blog can be viewed at www.dkmillar.com They are newlyweds honey mooning for 6 months! Hey that’s longer than some marriages last these days. We were looking for crew for the annual New Years day regatta, and invite them to join us. Gayle and Scott are aboard Priority with their two boys Dakota and Declan. We sailed by each other in Marsh Harbour and noticed we both had young boys aboard. We had an chance to finally meet here at Staniel Cay, their family also joined us for the Regatta, more on that later. New Years Eve we had dinner on our boat Black Diamond, and consumed large amounts of Mahi Mahi that I caught the day before.

Then of course we had to join the festivities just a hundred feet from our boat slip. The party on the pier and in front of the club house went on for hours past mid-night. The grand finally was a rather professional fire works display. As a sailor, I could not think of a better way to ring in the New Year, but enjoying a party at the Staniel Cay Yacht Club in the Bahamas.

On thier 6 month Honey Moon dancing it up, Duane & Kim.

Scott and Gayle live aboard on their boat Priority.

Now you know where Captain High Liner retired to…

This harbour has a few sand sharks living here under the docks. They are harmless, they are mostly bottom feeders that eat what ever they can find.

These lovely cottages overlooking the water can be rented from the Staniel Cay Yacht Club, and you also have full use of the facilities and pool. We spend an afternoon by the pool with our new friends. I spent most of the afternoon hosing the boat down, filling the water tanks, fueling up and trying to fix an electrical problem, that turned out to simply be a blown fuse at the dock.

Beautiful Gardening through out this island.

Small Swimming pool is available for yachters and cottage renters.

Sunset view from the cottages and the back of your boat.

The kids also got invited to a kids party on the island.

We explored most of the island by foot, walked to one end of the island where the kids were invited to a children’s party that was held by some local Church members. Some kids even rhymed off versus they learned. There was a little dog that followed us all over town, Alexander loved that. We bought a few supplies at the local store and then got a ride by golf cart to the Thunderball Restaurant that is on the site of where the James Bond movie by the same name was filmed. The food is really good, it is worth the visit. Just call them on the VHF they will pick you up with their golf cart. Also if you are into Scuba or Snorkeling you might want to go visit the caves the movie was filmed in. Just watch out for the lion fish, they are poisonous. They are not native to the area, but actually escaped from the Atlantis Resort Aquariums and have multiplied since.

Doggie is driving us to The Thunderball Restaurant on his Golf Cart. 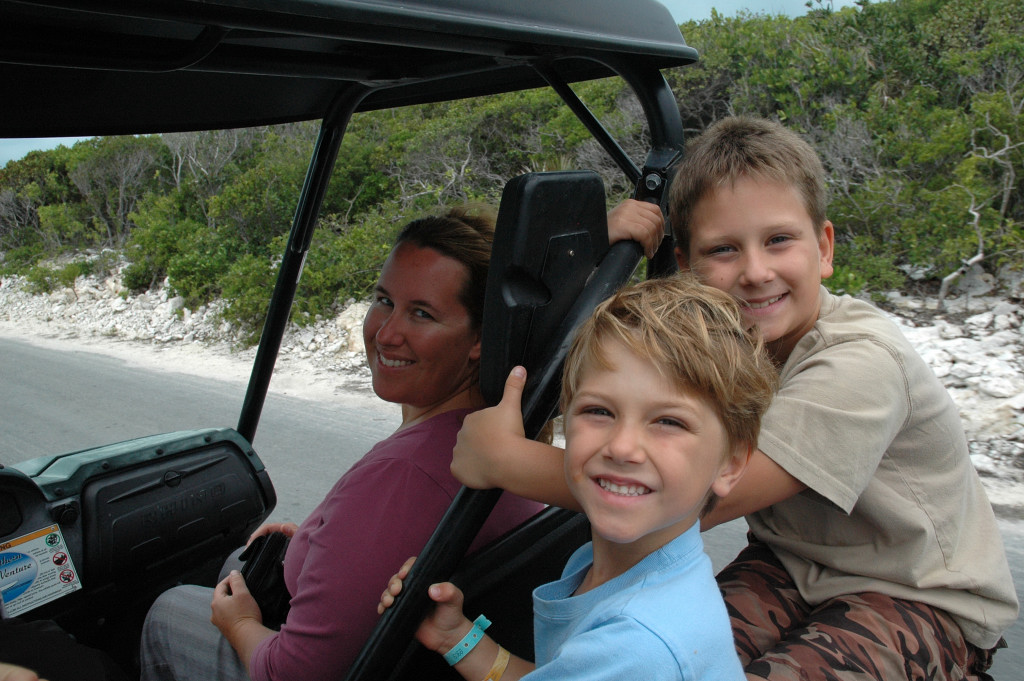 Golf carts are the normal mode of transportation in the Bahamas.

View from the Thunderball Restaurant, this is where one of the James Bond 007 Movies was filmed.

On the Terrace on the Thunderball Restaurant. Alex with an old fishing boat.

Another view from Thunderball, a look at their docks and towards the Staniel Cay Yacht Club.