A Crew Member’s account of the LO300 aboard Black Diamond.

The Lake Ontario 300 is billed as the longest annual fresh water race in the world. I competed in the race this year aboard “Black Diamond” with Captain Ed Radonic, and crew Andrew McAllister, Cez Makowski, Kate Thomas and Will French.

The Start: Twelve rolling starts are scheduled for the 160 boats so as not to get in each other’s way. The Prep flag for start#9 goes up, the rush of Adrenaline is inevitable. Downwind start, spinnaker flying and quickly approaching the starting line. Before we know it, we cross the start line and the race has begun for Black Diamond. Hold on, that wasn’t our start! we realize ,“SPINNAKER DOWN !”, easier said than done, with a spinnaker larger in size than the average condo (1300 sqft). Everybody hussled, gybed back around and crossed the start again, this time with boats from our division. It took a bit to get the boat back to speed. 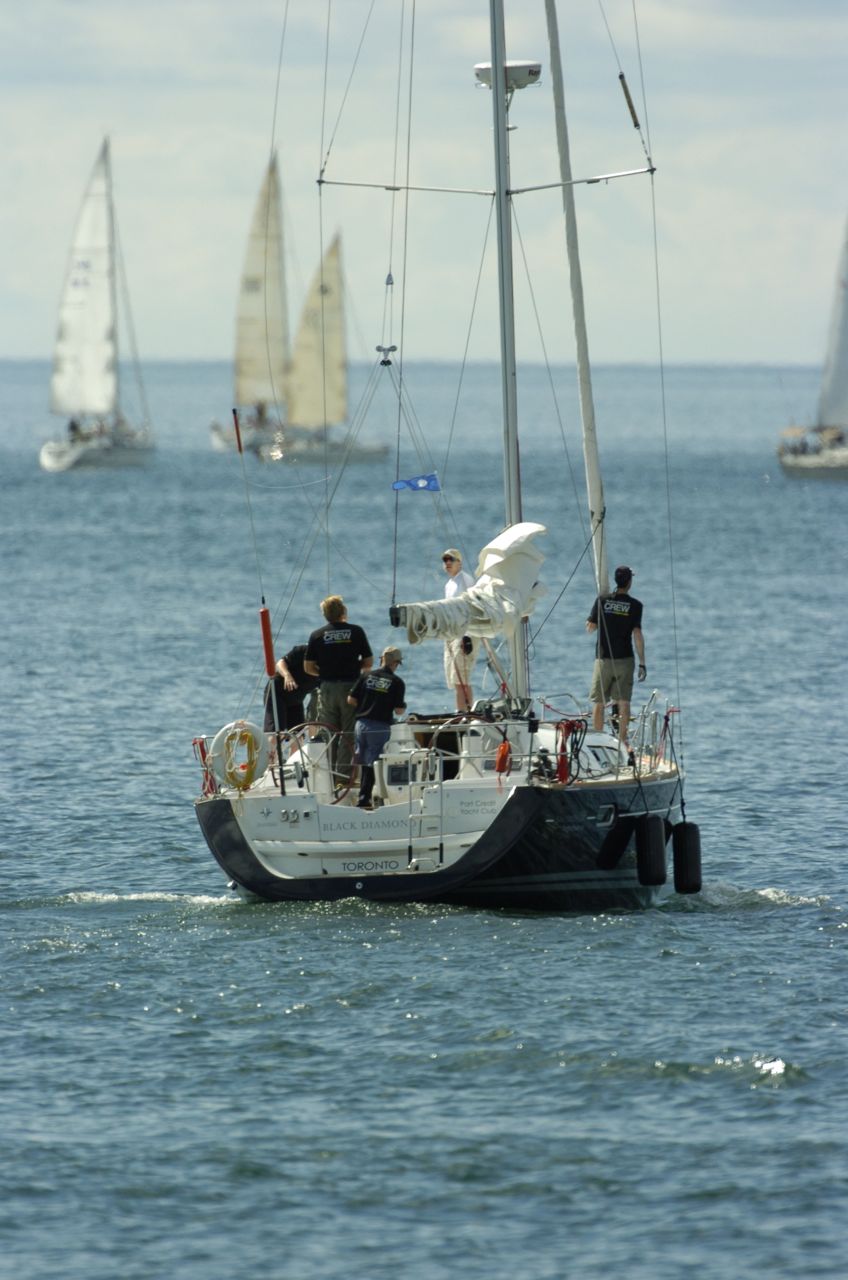 Motoring out to the start line. Photo By Cescato Studios, www.cescato.com/Lakes300

Saturday day: downwind leg to Main Duck Island: The strategy to the Island, the eastern most point of the race, was to stay away from shore for better winds. We trimmed the boat for speed and sailed right on the rhum line. Sailing offshore also kept us dry, boats close to shore had to cope with hours of rain. The plan was precisely executed, Black Diamond rounded Main Duck early Sunday morning, amongst the first boats of our division. The first day made for excellent sailing, sunny, dry and fast downwind, Max boat speed 10.5Kn, on 18-23 Kn. breeze. Far from eventless, the first day took its toll. The steady easterly winds created considerable swells. Once the sun set I wasn’t feeling the greatest, the horizon was no longer visible the problems started for me, having no other option but to stay below deck for most of the night. One of the few things that I do remember is Captain Ed bringing a bucket, I still wonder if the concern was the well being of the crew OR THE PRISTINE BOAT CONDITION, Just Joking Ed! Another interesting incident took place the first night. One would think that a collision with another racing vessel, on such a vast lake would be near impossible. That theory proved wrong during the first shift change. The crew was on a four-hour shift schedule. At about 3 am., pitch dark, as the shift change is taking place; a boat approached us fast from starboard on collision course. Within seconds he is upon us aiming mid ship. “Starboard, Starboard, STARBOARD!” We all yelled desperately. He ducked us by no more than a boat length. It sure took me a bit to reconcile my sleep afterwards. Upon further consideration Captain Ed notified us that normal racing rules don’t apply from about and hour before sunset and and hour after sun rise. The international rules for collision avoidance take precedence. At night it is almost impossible to see who is on starboard or port, at least not until its almost too late. Case in point. This experience illustrates the importance of remaining on a vivid watch all night. Also the running lights of vessels at night appear to be further than they might actually be. In long distance racing be especially alert when approaching turning marks, dozens of boats could be approaching at nearly the same time. 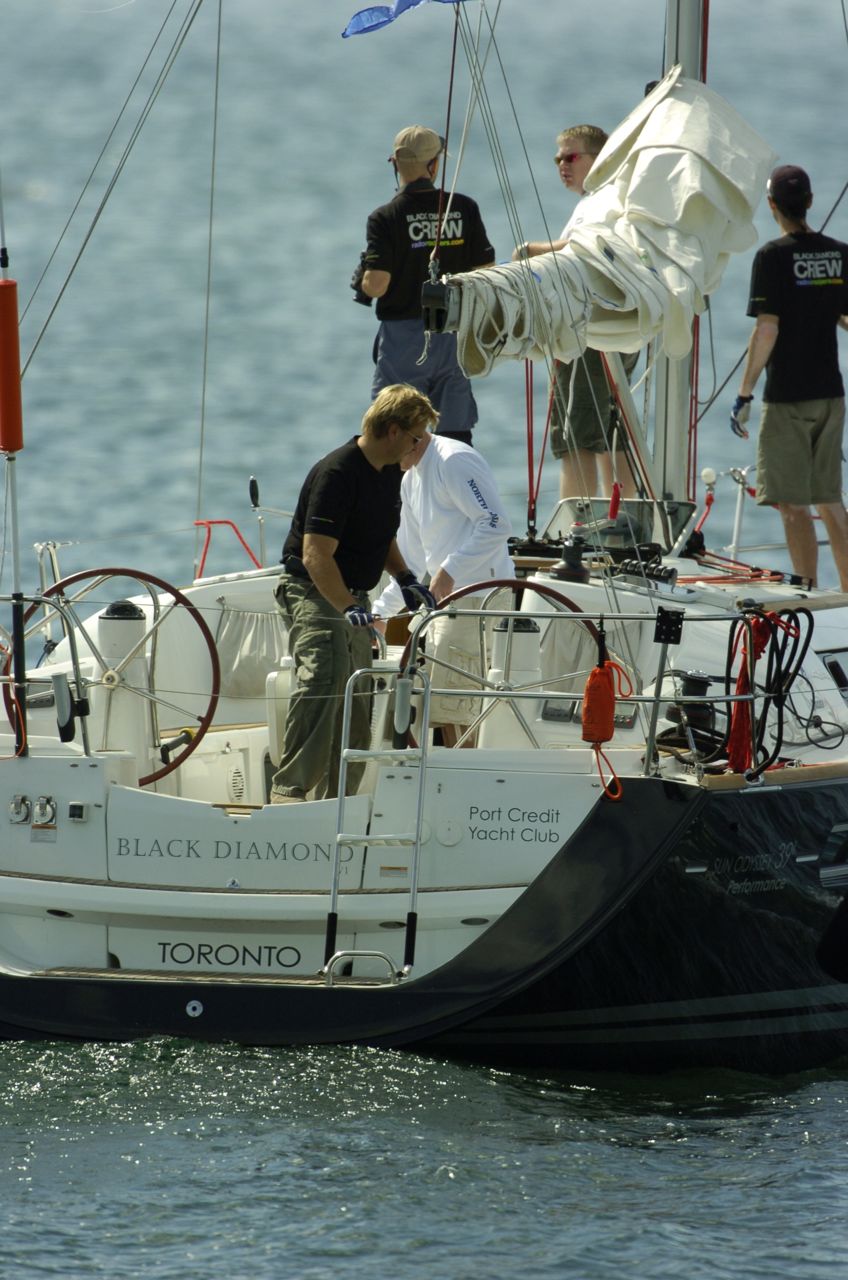 All pumped up & adorning our Black Diamond Crew Shirts, sponsored by RadonicRodgers Design+Marketing

Sunday: The spinnaker had been flying from the beginning of the race, It was about 6 a.m., the sun was just rising. Overnight, either the spreaders or the radar reflector tore the shoot. After 20 hours of abuse, just like Team New Zealand on 32nd America’s Cup, the spinnaker couldn’t take any more and it ripped. At this point we where just about to round Main Duck and could only hoped for an upwind battle for the remainder of the race or it would be all over for us. Moderate winds and rough seas required the crew to hang from the rail, some asleep, some awake, the boat handled very well, it truly liked these conditions. What a great day for sailing. Rounding the Oswego mark by noon, Black Diamond was gaining on competitors. The forecast indicated winds would become light in the afternoon. Hoping for a better breeze, we headed to the middle of the lake, hard luck, we were off the rhum line and the boats close to shore had better conditions and gained on us big time. Captain Ed continued preparing the meals, apparently after concerns that we would make a mess in the galley. The crew couldn’t complain. He did one fine job. The wind pretty much died at sunset. We took the opportunity to shower prior to dinner. What a treat! Before it got totally dark, the crew arranged the 4-hour shifts, 3 on, 3 off. I took the helm and stayed on for 6 hours, I did my share, I couldn’t do much the previous night due to seasickness. The night was bright, seas calm and easy to navigate under the stars. A boat approached us from starboard several times, we eventually pulled away by playing the wind shifts. It will take quite some time before I forget such a great feeling as this. 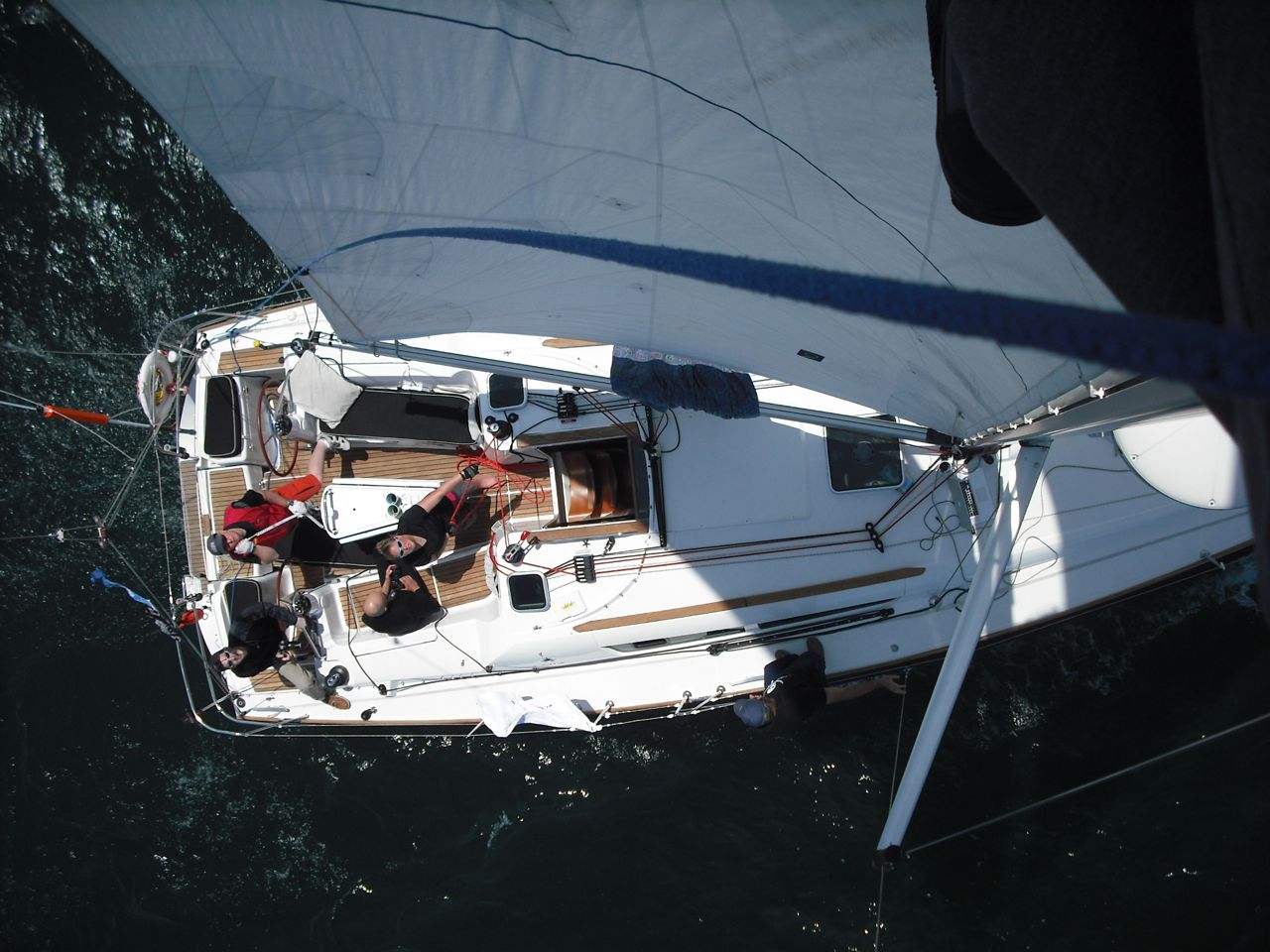 Taken half way up the mast, by Will French while under sail up wind.

Monday: prevailing light winds made it for too tranquil of an upwind leg, we even had the chance to send someone up the mast to settle a challenge about a tell tale. Once we rounded the Niagara mark, the wind shifted, and it was a spinnaker leg to the finish, unfortunately we blew ours and lost lots of time on this leg, at least 4 hours. The wind then died completely. We were barely moving and therefore ended up watching a movie. The last 6 miles took us another 3 hours or more! We crossed the finish line in slow motion on the last hours of Monday, just before mid-night. Lake Ontario 300, 2009, Great adventure. A race recommended to all serious sailing enthusiasts. The weather cooperated. The boat exceeded expectations. Captain Ed and the crew made it for one fun experience.

More professional pictures of the LO300 available at: www.cescato.com/Lakes300