The LO300 started and ended today for us at Black Diamond.

Three Squall lines blew through the race with in a few hours. Sustained winds of 30 knots or 52km, and gusts of 48 knots, 80-90 km per hour. 6 to 8+ foot waves, marble sized hail was coming down. So far 30+ boats have abandoned race, 2 capsizes, 1 sunken boat, one dismasted, and dozens and dozens with sail and rig damage. 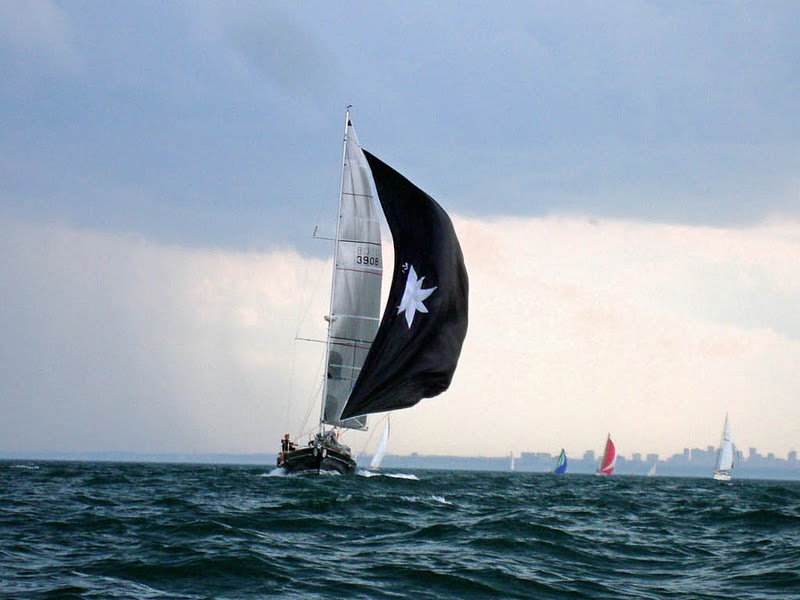 You can see the line squal behind us, as the storm approaches.

We have abandoned the race, also at 6PM this evening. We have sustained an injury to a crew member, Glen Butt from PCYC. After a near broach and tearing the spinnaker in half, we were trying to retrieve it from going under the boat. Just prior to this our cock put was filling with water, over a foot an half of water in the cock put, but self draining, and emptying fast. We had an accidental gybe under very tough conditions, and Glenn got caught by the main sheet and was knocked at full speed across the deck about 6 feet and smashing on the life lines, and not only knocking the wind out of him, but also possibly breaking a rib or two. We are very thankful the life lines caught him, and that he was not hit by the boom, and that his injuries were not more serious. The winds we recorded were sustained at 30 knots and gusting to 48.5 knots. We put a reef in the main, and during the accidental gybe the reef point was completely blown out as well.

Again we are thankful that Glen was not hurt more than he was, and feel terrible about the whole situations. We are also happy to hear there were no other injuries in this race.

Sunday we shall make our way back home to PCYC, we understand there are more storms similar coming through, but will keep a sharp look out, and hopefully make it back safely.

Our Crew Member Glen Butt, is doing much better, and is resting at home. He might even make it down to PCYC tonight to enjoy the Fiddle Sticks live performance and after race party celebrations. 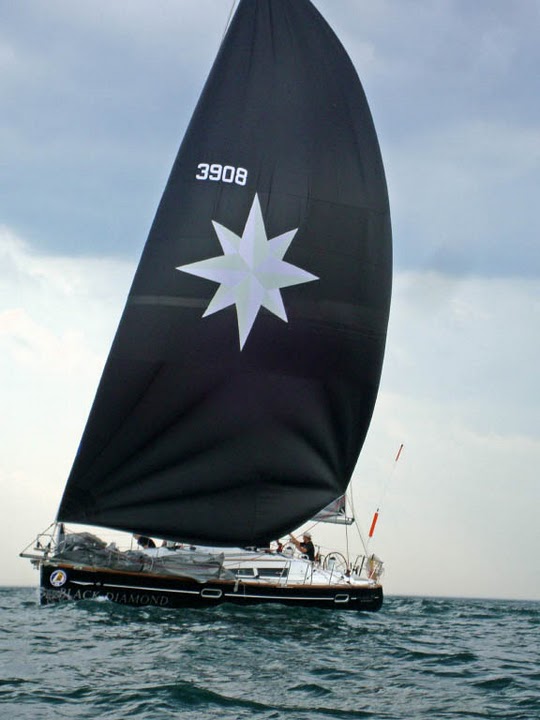 This spinnaker ripped at the mast head.

UPDATE 1 : Further updates now show 5 boats dismasted, and Cheeky Monkey capsized and sank. Airborne’s Boom snapped in half, where he tied off the preventer.Glen is back home resting, confirmed he has broken 2 ribs + 1 fractured rub, total 3 ribs.. Our thoughts are with him, as we sail Black Diamond back to home port.

UPDATE 2 : Over 50 boats have withdrawn from the race.  Another series of squalls are to hit, only this time it will be in the middle of the night between 1am and 5am. Just as boats are completing their last leg from Niagara Mark to PCYC.  We will be back at PCYC by 1AM, looks like we will have just enough fuel to make it back.

UPDATE 3 : Over 50 boats have withdrawn from the race.  As of Tuesday morning there are still 9 boats out there. The evening squalls did not hit, thank God. Cheeky Monkey did not end up sinking, those were initial reports I heard on the water. It did capsize, and the crew were rescued, and the boat was left over night until it could be righted and  towed in. Some boats upon arrival report gusts or wind as high as 68 knots.