Watch this amazing video! This was shot unplanned and impromptu!

We were anchored just 60 feet from the beach at Chat ‘n Chill, Stocking Island, in the Exumas of the Bahamas. My wife told me she just saw a dolphin swimming near our boat, so I grabbed my GO PRO Camera, and my snorkelling gear and jumped in. There were a few people swimming by the beach, and they also noticed the dolphin and started swimming towards it. The dolphin was playing hide and go seek with the humans! He would surface and get the peoples attention, then dive down, and swim up behind them and surface again. The people would turn around and start swimming towards the dolphin again, he would dive down and disappear again. The game continues, what an intelligent dolphin, he must think us humans are pretty dumb. 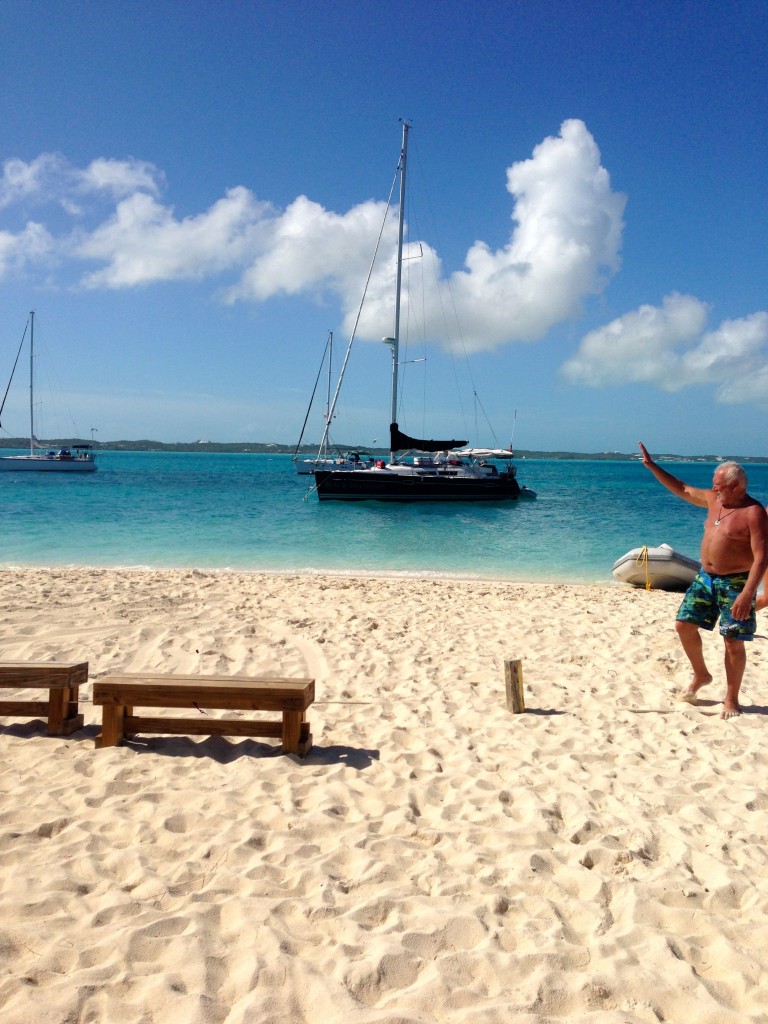 This shows how close we were anchored, and the dolphin was between the beach and our boat.

I on the other hand, saw a different perspective underwater, I could see where he was going, and I would follow him. He allowed me to get pretty close, but not too close, any closer than a 3 feet and he would burst off. On the other hand, my 10 year old son Alex, who is 70lbs soaking wet, was able to get as close as a foot from him. Alex was snorkelling on the surface and the dolphin was swimming upside down underneath him. They were a foot apart and examining each other. Alex never reached out to touch him, they just enjoyed each others company. I guess the dolphin did not feel threatened by a innocent little boy.

However, I would not recommend reaching out and grabbing his dorsal fin and trying to go for a ride. These are wild dolphin and they may try to defend themselves. They are not trained sea world type dolphins. I doubt that you would be successful at the getting ahold of his dorsal fin anyways. Dolphin have been known to be able to kill sharks, by thrusting them in the temple with their snout. They have been known to save human divers from sharks as well, by circling around them, and allowing the divers to surface to safety.

Dolphin could swim at speeds of up to 20 knots, their cruising speed is 3 to 6 knots. When swimming in the bow wave of a boat, they are being pushed along. Although the boat might be doing 10 knots or more, they are actually only exerting effort to swim about 3- 6 knots, they are taking a free ride, swimming in a current so to speak.

In my encounter the dolphin spoke to me in his own language, if you listen to the video carefully, you can hear him speaking. I believe he was saying watch this, then he dug up a crab with his snout and ate it. Then he smiled at me all proud and swam away. This was an amazing experience, and not unusual at all to experience in the out islands of the Bahamas.