Navigating Cuts in island keys or the Cays of the Bahamas

Cruising many of the islands in the southern latitudes, especially in the Bahamas, will require careful attention, knowledge and skills when navigating in and out of the cuts between the inside and the ocean side of the islands. The Bahamas are known for narrow and shallow cuts. These difficult cuts can be further complicated by other conditions caused by the tides, currents and weather.

Considerations before navigating a cut.

• How narrow is the cut, sometimes this is measured in the number of units of the length of your boats beam.

• Are there shoals or reefs awash or underwater, which are not visible.

• What is the depth of the water at the cut.

• Weather – Direction of the wind, Blowing into or out of the cut

• Tide coming in or going out, Ebbing or Flooding, is it against the wind?

• Based on all the potential hazards above, it is most advisable to enter cuts only during day light hours.

• Ask for advice from local knowledge 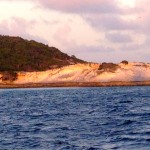 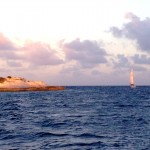 Cave Cay on the left 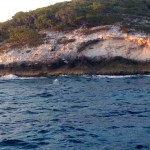 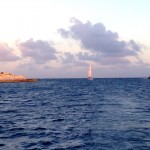 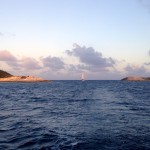 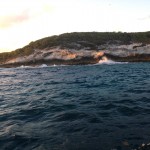 Narrow cuts can be difficult to navigate, ensure your approach is correct and safely clear of any invisible shoals or reefs. Always refer to paper charts, for the Bahamas Explorer Charts are the best! http://www.explorercharts.com Your chart plotter can not be trusted 100%, it can only be used as a general guide, especially in the Bahamas. Consider the depth of the water, consider the tide which can alter that depth by as much as 4 or 5 feet in the Bahamas. Consult your tide tables. If there are large swells or waves, in the trough of the wave can vary by 10 feet from top to bottom. The boat can drop by 10 feet in very large swells or waves. So if you are in a charted cut of 20 feet depth and your boat draws 6 feet, you may feel you are ok. But in a 10 foot trough combined with a low tide, the depth can be 14 feet lower in the trough and your keel will hit bottom. This could be catastrophic.

Now add to this, tidal current and surges, as an enormous amount of water is either entering or exiting the inside of the islands. These surges and strong currents can reach 4-7 knots. These currents and surges can push your boat from one side of the cut to the other, spin the boat around, and disorient you at night. You may be washed onto the reef or shore, you may even steer towards either in your disorientation. This is why I don’t advice entering one after dark, especially if there is no moon. The moon rise can be very late in the evening, know when the moon is rising if you are caught on the outside.

Here are a couple of interesting experiences we have had entering or exiting a cut.

Recently exiting Dotham Cut near Bitter Guana Cay, Exumas – the navigable area is pretty wide and the depth is good. We were making about 5 knots and exiting with an ebbing tide and the wind was behind us. These were perfect conditions for exiting the cut. Even so the boat’s keel was pushed from side to side and concentration was necessary. Our speed over the ground increased from 5 knots to 11 knots with the current. This show me that the out going current was about 6 knots. There were a few other boats trying to enter this cut in these conditions – can you believe that! They exiting to the ocean side somewhere up the cays and maybe did not consider how and when they will come back in. They were having to beat up wind into the cut, with an opposing current of 6 knots. They would have to sail faster than this to make any way at all. A few boats attempted – then had to bail, and some were spun around by the keel as they aborted. Now you don’t want to be trying this at night! I was amazed that a boat actually made it in. The tactic she used was to hug the shore very closely, where the current would be far less, still having to beat upwind, with engines blazing. They were making very slow way, but eventually made it in, I am sure they were white knuckling the whole way.

When you promise friends “A time and a place” this can often lead to trouble. We had to be there by a certain time. Never promise a time and place, just let them know you can only promise one of the two. If there is a place they want to meet you, then you’ll let them know when you have safely arrived at the place, and they can fly down. If it is a time they wish to meet, then you will let them know what place you are at during that time, and they can fly there. But to guarantee both is very difficult and can be dangerous if your trying to get there in the wrong conditions.

North Bar Channel in the Abacos, – on another occasion, my wife and I were anchored in this southern end of the Abacos on our way to meet friends in Nassau. The cut looked wide, but the navigable area was about half the size, both sides had dangerous reefs under the surface and could not bee seen. The weather was heavy on the outside and large swells were coming in the cut – as high as 20 feet! It was unbelievable. There were boats trying to come in on this surf, the depth under normal conditions was 25 feet, but in this case the boats would have hit bottom. I radioed a couple of boats about to make attempts to enter, I convinced them to abort. We decided to stay the night at anchor and see if the next day would be better.

North Bar Cut! You can see crashing waves of 20 feet in height.

Thankfully the next day was better, but still rough conditions, the swells were down to about 10 feet, and we decided it could be accomplished succesfully. There were range markers on the main land on the inside of the cut, these are situated so boats entering could line up the range markers and make a safe entry and avoiding the reefs. But for us exiting, we would have to be looking behind us in order to line up the markers. So this was our plan. Roxane would straddle the cock pit table, facing to the aft of the boat, holding on for dear life. While I helmed and faced forward as she would tell me to steer a little to port or starboard. As we exited the boat rode over 10 foot waves, and slammed down as it crested. The kids down below were enjoying the tummy hills, while playing nintendo. Yes we have some crazy kids, they grew up on boats and this was par for the course.

Ship Wrecks There are many ship wrecks recorded by folks trying to enter these type of cuts under various unsafe conditions. Some folks aborting such rallies as the 1,500 to the BVIs. In bad weather, it is much safer to stay offshore, than try to navigate an unknown cut, in a country you did not plan to land on, and maybe you don’t have the paper charts, you are having to rely on your chart plotter, (Chart plotters not accurate) and most likely entering at night.

Conclusion The best time to approach a cut, would be on slack tide, during day light with calm weather conditions. Realizing that this is not always possible, ensure that more of these conditions are with you, rather than against you. Enter on a flood tide, and exit on an ebb tide. But also consider wave and wind condition against the tide, since this will pick up the seas to much larger waves. Ask for local knowledge when ever possible.

Check these links to previous posts on Cave Cay