Shark Attack in the Bahamas! 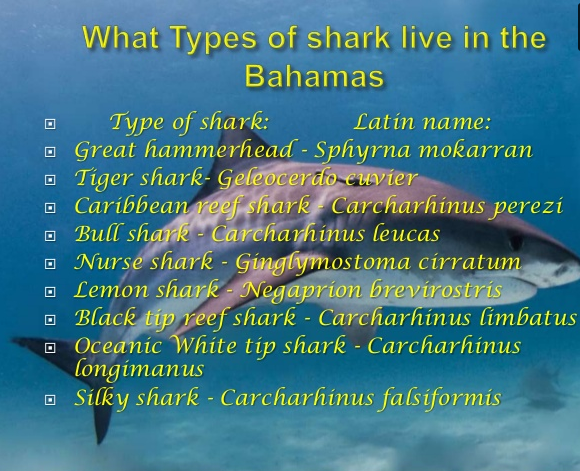 Types of Sharks in the Bahamas

Sharks Attacks in the Bahamas

The Bahamas have many species of sharks that can be found in different regions and islands of the Bahamas. Next to Florida and South Africa, it is the second most common place where shark attacks have been recorded. This maybe also due the size of the Bahamas, compared to smaller Caribbean islands. The Bahamas spans over an area the size of the entire Caribbean, consists of 700 islands, the Gulf Stream on side and the open Atlantic on the other. But don’t let that scare you, since the 1800’s only about 35 recorded attacks, of those only one fatal in 2008. An Australian tourist was fatally injured during a feeding shark dive, you can search it for more details.

Really nothing to be scared of or worried about, just be smart.

I have been sailing and swimming in the Bahamas for years now, and have only seen one small reef shark about 4 feet long, on the inside shallows. You won’t usually find them on the inside, but this was near a cut in the cays (opening to the ocean side). You are more likely going to encounter a shark on the out side, reefs, where the water depth drops off, and your odds increase further if you are spear fishing. This will attract sharks within minutes, they can sense the struggle of the fish and their blood.

My 10 year old son Alex and I were snorkelling under the boat, anchored near a cut. There were a number of interesting large fish under our boat, so we were just checking them out and swimming with them. Alex first noticed the 4 foot reef shark pass by, distinctive looking and unmistakable movement through the water. He immediately climbed up the swim ladder of the boat, I hung around a but longer just to watch him swim around the boat. He circled around me about 4 times, then he started to get closer. Probably curious and want to take a close look at me. I then too climbed out of the water. He was probably waiting for us to hunt down those fish, so he could steal them.

What I have learned about sharks since I have been around the Bahamas, is that they are no cold blooded killers that will attack and kill you the first chance they get. I am far less scared of them now, then before I actually experienced them, and learned more about their actual behaviours, rather than relying on what I learned from the movie JAWS.

Most sharks are just curious cruisers, really looking for a easy free meal, they are not looking to pick a fight with an animal as large or almost as large as them – humans. They were designed to clean up the oceans of, dead or injured fish and animals. They will however compete or fight for that meal. See the story below.

Ocearch is a scientific vessel that has been tagging and tracking sharks for the last couple of years. You can track their migration, habits and places they have been. Many Great Whites are tracked.

1.5 years ago today they tagged and released #MaryLee – a 16 ft. 3,456 lb. mature female Great White Shark off of Cape Cod, Massachusetts. Since her tag and release, Mary Lee has traveled roughly 12,595 miles from Cape Cod all the way to Jacksonville, Florida and even Bermuda !
Track Mary Lee on the #SharkTracker here: http://sharks-ocearch.verite.com/

A friend of mine is attacked by a Shark in the Bahamas. 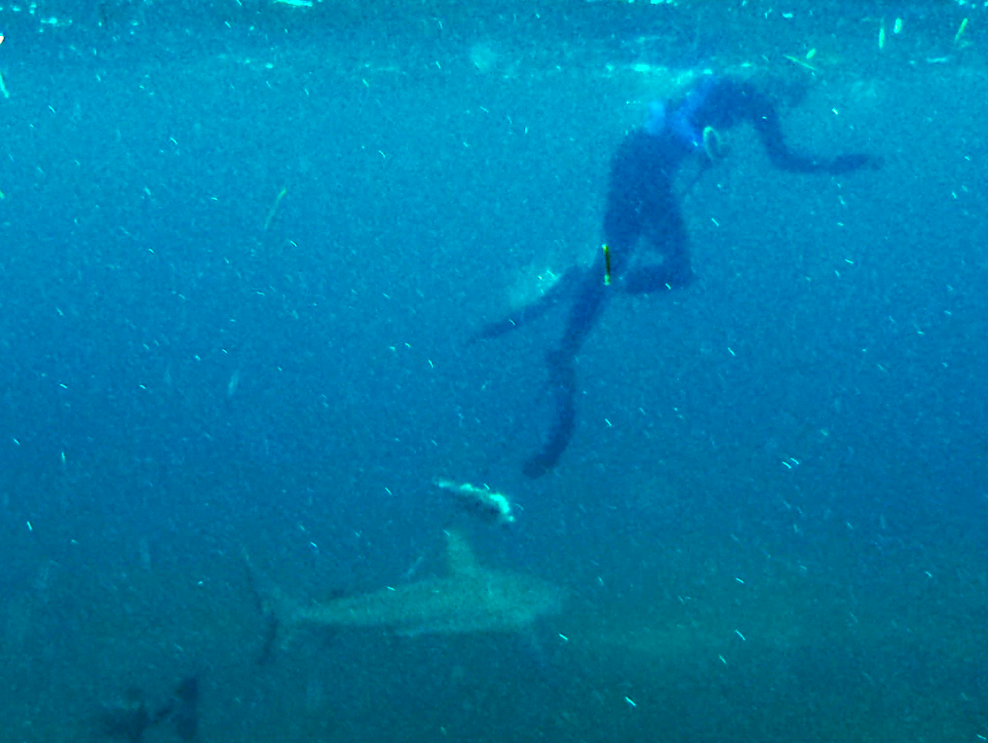 Above photo courtesy of the sailing blogs of Addison Chan, Many adventure sailing in Cuba.

This story explains a lot about shark behaviour and what can be done to avoid them.

I had a friend who has been spear fishing for years in the Bahamas, was attacked by a 5-6 foot reef shark last week. He is able to dive over 30 feet and hold his breath for about 2 mins, and he is in his late 50’s or early 60’s. He says that when you spear a fish, you should immediately surface, and even before you get out, raise the fish out of the water, so your friend in the dingy can grab the fish, and then you climb out immediately. Sharks are on the way! They can sense the electrical impulses of a wounded or panicking speared fish from a long distance away, and they are attracted to the area. Then they pick up the blood scent. After spearing the fish, it went down under a rock and took his spear with it, he could not reach it right away. So he surfaced, looked around, no sharks, took another breath and dove down again. He grabbed the spear and was pulling the fish out from under the rock, when he was smashed in the back pretty hard. He did not have time to think or know what happened, he turned around, and the shark smashed him again in the chest with his snout. Never biting, just beating him up with his snout. Then another blow to his chin. This all happened in a quick few seconds, and then he started to surface. He had the spear in his hand, but the fish fell off the spear. He ascended 15-20 feet, another 10 feet go. He was looking down the whole time through his mask, with his spear between his legs. He saw the shark coming right at him from below at pretty good speed. He thought this was it. He jabbed between his legs with his spear, the shark came pretty close, then went back down and took the fish.  He says the shark was just competing for the fish. The shark either thought he as another shark (he was wearing a full dark wet suit) or large fish or another large animal that just caught this fish, and it was in competition to show who was more dominate and who would get to eat the fish. He just wanted to steal the meal from him. Apparently sharks do this with each other, they don’t want to start a full out fight with each other. This wastes energy, and opens themselves up for injury. So they threaten each other by wrestling and hitting with their snouts, the less dominate will back down and the other gets the meal. When he retreated up, the shark was just making sure he was giving up, and then went back down for the meal. Not much different than you will see in Africa, animals competing and trying to steal each others meals. His friend in the dinghy was wearing one of those new shark repellent bracelets, not sure if that made the shark retreat as it got closer to the dinghy. Lucky for him that is all that happened, but he had nightmares for the few nights.

Interesting Articles on Sharks of the Bahamas and Attacks.

Below is a Shark Dive we did ourselves, Captain Ed and my kids, who just got certified as PADI scuba divers. This was their 6th dive, 3rd day diving.