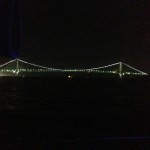 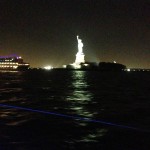 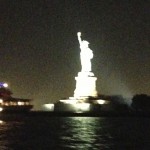 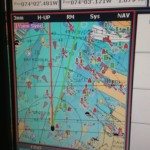 Check out the AIS screen capture to see how crazy it can get in New York Harbour. Fortune’s Favour went ahead and picked up their final crew members in Manhattan and we met at the Liberty Landing Marina on the New Jersey Side. This Marina is often the last jump off point for those going offshore. They have a 24 hour a day self service gas dock. Just put in your credit card and pump, 24 hours a day! Love it!

Some last minute preparations, ready the interior for offshore work, tune the standing rigging for offshore settings, courtesy of Ken Bruce. Fuel Up the Diesel (130 litres 30 Gallons), Gas up tanks for generator and dinghy, and fill the water tanks, we carry 400 litres or almost 100 gallons. Once we arrived we still had 3/4 of our water, and over 1/2 the Diesel left.

The Captains safety briefing included such things as;

• Our routing that we were going to take (See this post for details, http://www.sailboatcruise.ca/2013/10/15/sail-routing-from-new-york-city-to-the-bahamas-or-florida-direct/

• Explanation of where all the safety equipment is, Operations of EPIRB, SPOT, Ditch Bag, Flares and other standard equipment. Our boat is equipped with all ISAF Offshore Category 2 equipment, we plan to do some of these class races over the next couple of years.  We have an 8 man Offshore Ocean Life Raft, we discussed how to use it, when and how to deploy. We also covered Fire on board, and where the three fire extinguishers are. For more details on this also see this post.  http://www.sailboatcruise.ca/2012/04/06/marine-safety-med-a2-course-fire-fighting-life-raft-use-distress-signals/ 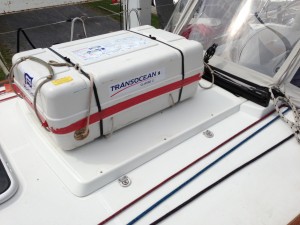 • Notice the pad eyes, had these 4 installed for the life raft, but can also be used with a shackle for the barber hauler, when close hauling, to bring the jib sheets in tighter. I also had 4 more installed near the bow. great for various uses, dinghy, generator, or just plain garbage bags the start to stick inside.

• We also had a Sat phone and Sirius Sat Weather on our chart plotter. More on this later. Invaluable on the ocean.

• On our boat, I insist that all crew wear sea sickness patches behind the ear lobe. We all applied those before we left. They take about 6 hours to take effect, but all our crew is experienced with sailing, and claim they never get sea sick, so 6 hours won’t hurt them. However, out there on the big seas, many fresh water sailors don’t know what they are getting into until they are out there. If you really don’t ever get sea sick, that’ s great. I do believe sea sickness is something some people may never get, while others are more prone to it. I think it may be genetic. But I am not taking a chance to find out which variety you are. If you are out there and get sever sea sickness, it becomes a safety hazard to yourself and to the rest of the crew and vessel. We will be down one or two crew members. The remaining crew will have to take longer shifts or not get a break or sleep at all. Fatigue will set in for all, more mistakes can happen. If  we only have two good helmsmen that can helm in a storm and one is sea sick, what are we going to do in a 36 hours storm? It is not fair to the other crew members. It may also take longer to get to shore than to our destination in some cases. On this trip we were as far as 300 miles, 500km offshore. In my opinion these patches are the only thing that really works all the time for all people. In my 6 passages, with over 24 crew, we have never had a problem using these patches, and the only side effect for some people is blurred vision. There is no drowsiness, like with some other methods.

Finally we left Liberty landing 10pm sharp after a quick fly by the Statue of Liberty! Frances gift for liberating from those nasty English!

Just cleared the Veranzano Bridge! Heading to the Sea Buoy which is the last buoy before the ocean, then south to the Cape! We are sailing doing 9 knots with the tide, winds are 14 knots.

Lots of traffic for next 4-5 hours. VHF radioed the harbour pilots, so they know where we are out here. Heading for the Sea Buoy, then hanging a right, south for the cape! It is always a good idea to call the harbour pilots, usually on Channel 13 when entering or exiting any busy port such as NYC. They will know you are out there and will keep a look out for you. We actually had them call us back a few times, to keep track of us, and make sure we don’t have a collision. Some of my crew commented that they have never been so close to a freighter. The channel is only wide enough for two freighters to pass port to port. That would be about 300-400 feet wide between the buoys. Sometimes they feel you should not be in the shipping channel, but once you call them and explain why you are there, for example. Our draft is almost 7 feet, and in some locations outside this channel, the depths quickly fall below 7 feet. We can often just stay outside of the channels, but still need to remain very close.

Throughout these post, you will notice little quotes that were sent out during this passage. These were sent with our SPOT CONNECT Messenger. These are limited messages we could send by Sat to a list of e-mails and update our Facebook and Twitter. Pretty cool! Since there is no cell service on the Ocean, this along with our SAT phone was our only form of regular communication. These messages also linked to the GPS Lat & long location at the time. If you click on the location, Change the view from MAP to SAT, shows you a much better colour Sat photo of the location and ocean floor.

“Cruise Carnival Bearing down on us talked to Captain”

Just after clearing the sea buoy we were bow to bow with Carnival Cruise Lines, Splendour. She must have been coming into Port in New York City. You never know who might be on the helm of a Carnival Ship, Remember they owned Costa Concordia. Plus it is always a good idea to let them know your there and on a collision course. For our 40 foot boat it is difficult to manoeuvre in some Ocean conditions. For example; if we are running with the wind with 20 foot swells, and bow to bow with a cruise ship, for us to avoid it may mean having to go into a reach or close reach (up wind) for long periods of time. This can be dangerous in large seas and could cause a broach, round up, know down or roll over, depending on actual conditions. If each of us could alter course a few degrees it makes life a lot easier. However after six ocean passages and having been in this situation a few dozen times now, I am starting to realize they don’t believe you or care. Only about 20 percent of the time have ships altered course for me, and only with much persuasion. Usually they all agree, but then don’t do anything. They think you don’t know what you are talking about, they don’t see you, and on this great big ocean, how could you in your little sail boat know we are on a collision course. Then after 1/2 an hour we are about a mile apart or less and about to collide, I call them back, and basically say I told you so. Then they just respond with, oh well its too late for us to do anything now, so you’ll have to take our stern. On previous trips, I had to close haul in 15 foot seas, up large swells and waves, to take the stern of a 1000 foot freighter. I had to beat up wind along side of the freighter for a 1,000 feet with the crew sitting on the back laughing at me. This was a foreign crew, who will happily run you over and kill you. Just ignore you. No witnesses, who will be the wiser. AIS has helped this sorta thing from happening far less than it use to. At least now when you are referring to them by name, they at least respond to the hail.

Our Chart plotter and AIS does all the calculations and actually tells me when we will be colliding, in miles and time, etc.. It also tracks the other ship, tells me their speed, course and bearing. Even plots a predicted track for the other vessel, and where we may collide.  So when a ship agrees to alter course 5 degrees, and I see that he has not , my AIS is still showing a course of 92 degrees and after 5 mins is still 92 degrees. Call me a pain in the butt, but I’ll call him back and notify him that I see he is still on a course of 92 degrees. H then realizes that I know what I am talking about, and only then will he changes course 5 degrees. After 1/2 an hour, we still pass very close to each other. I have gained a little respect from the Captain and he calls me back on the radio, only now far more polite and wish me fair well and a safe journey.

The above are some notes on previous journeys, since I have gotten a little wiser. It is funny how experience will do that. Now, I know they don’t see us, I know they don’t care, and I know its not worth the extra effort or gamble to try and persuade these guys to alter course. I’ll do my evasive actions well in advance and not bother with these guys. Yes, many of you are saying, isn’t that what you are suppose to do, the large vessel has the right of way. Yes your right, but what is an ADHD, OCD personality suppose to do at sea for a week. I have all these toys on the boat, I might as well use them. I got to find something to entertain myself – don’t I. LOL  : )

Below you can enjoy some links to previous blog posts from previous journeys on the same topic.