Offshore from NYC to Cape Hatteras on route to the Bahamas. 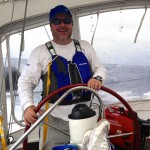 Ken Bruce on the helm. 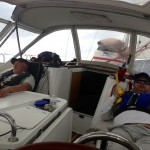 The guys getting some shut eye. 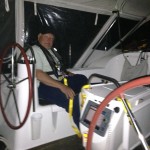 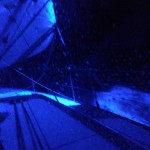 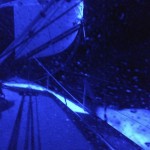 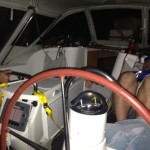 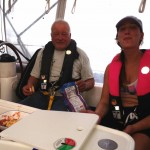 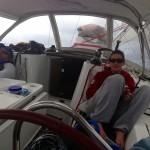 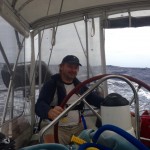 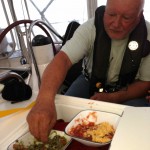 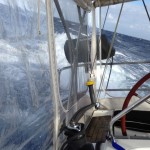 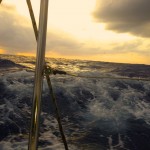 Dusk on the ocean. 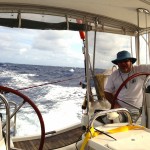 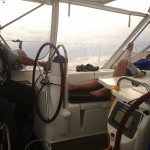 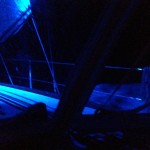 Very dark until the moon comes out.

Once we rounded the Sea Buoy outside of NYC and part way down Long Island, we set a way point to point offshore of Cape Hatteras. The Distance to the waypoint read 374 nautical miles. Transiting down the Hudson River and offshore from NYC in mid November was freezing cold! I mean freezing, especially at night and when your off shift and not very active trying to get a little shut eye. But we knew that each day we were heading into warmer climates. Each day we saw a temperature increase of about 3-5 degrees celsius or 6-10 degrees fahrenheit. Once we were south of the cape, we were in shorts and t-shirts and a very warm breeze was a blowing. When you are in the cold waters of the North Atlantic the whole boat is chilled from the hull up, but the same goes for when you round the Cape and are in hot water of the gulf stream. The whole boat warms from the hull up. Always look forward to that! 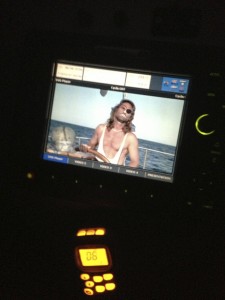 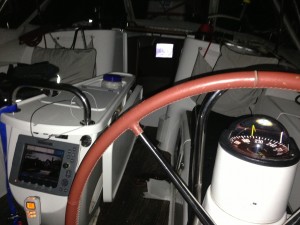 Watching a Movie on the Chart Plotter and Salon TV down below.

However the wind is traditionally lighter before you round the cape, we were motoring for much of the next day after leaving NYC, and popped in a movie or two to watch. Captain Ron is our favourite, if you haven’t seen it, it is a must! A little breeze filled in, only about 5-6 knots, so we popped the asym spinnaker, and we were doing 4-5 knots of boat speed. We actually kept that going all night and into the next morning.

My rule of thumb on the ocean is – the engine stays off unless we are doing less than 4 knots of boat speed. At this point we will turn on the engine and run at our optimal fuel conservation RPM, which is between 1,800 & 2,000 RPMs, we can do between 5-6 knots at this rate. We can run our engine a 40HP Yanmar diesel for 2-3 days on only 130 litres or 35 gallons of fuel.  There is usually always enough wind on the ocean to keep the boat moving faster than 4 knots. During a 6-7 day ocean passage, I usually find I may have to run the engine for 1-2 days due to lack of wind. But in the spring months of April and May, usually these are the months I am heading back up north, it is more common to have dead calm days during this time of year.

On this passage, we arrived in the Bahamas from NYC in 6.5 days, almost 1,300 nautical miles over 2,000 kms, and we still have over half a tank of fuel. We ran it occasionally mostly to charge the batteries.

A couple of times I had to motor from Charleston all the way to NYC, and we almost made it, but I did not want to risk it, and pulled into Atlantic City to Fuel up. This is a story in itself, follow this link for an entertaining read. http://www.sailboatcruise.ca/2009/04/26/safe-arrival-to-new-york-city/

SPOT CONNECT Messenger. – “We should be rounding the Cape in 24 hours. We flew the spin all night.”

SPOT CONNECT Messenger. – “Passed a US Warship & pod of dolphin.” 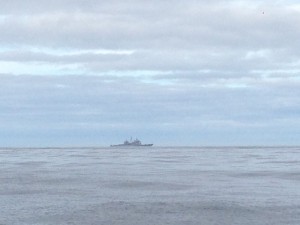 Still motoring, but still lots of exciting happenings to keep us entertained. Just north of the cape, you will find Norfolk, a US Navy, Military base. On just about all my ocean passages through here, we are engaged by a US Warship. They track you by radar, and call you on the VHF by your Lat and Long. So if you hear a VHF call from a US warship, check your Lat & Long them may be referring to you. They are usually conducting live war games with real ammunition. If you don’t stay clear of the quadrant off areas you might get blown out of the water! The only way to know what those areas are, is by talking to the war ship communications officer. Don’t worry, they’ll call you , but pay attention.

Check this link for a story on previous voyages through this area. And another story of how I almost hit a US Nuclear Submarine!

Link below scroll down to the US Nuclear Submarine! 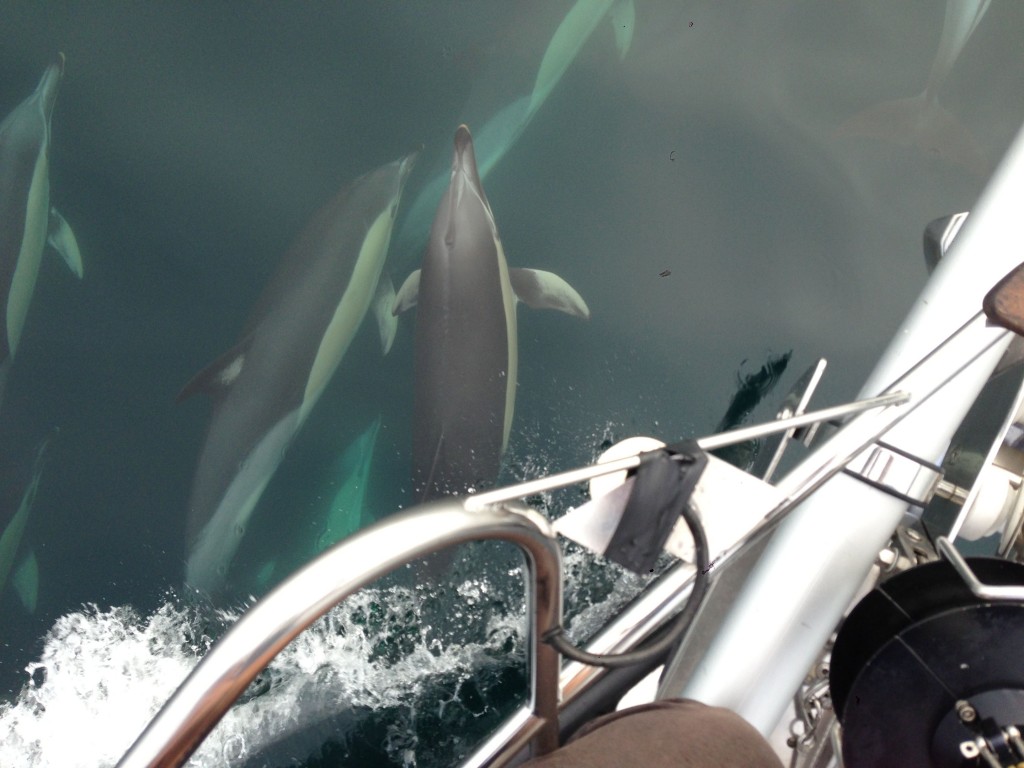 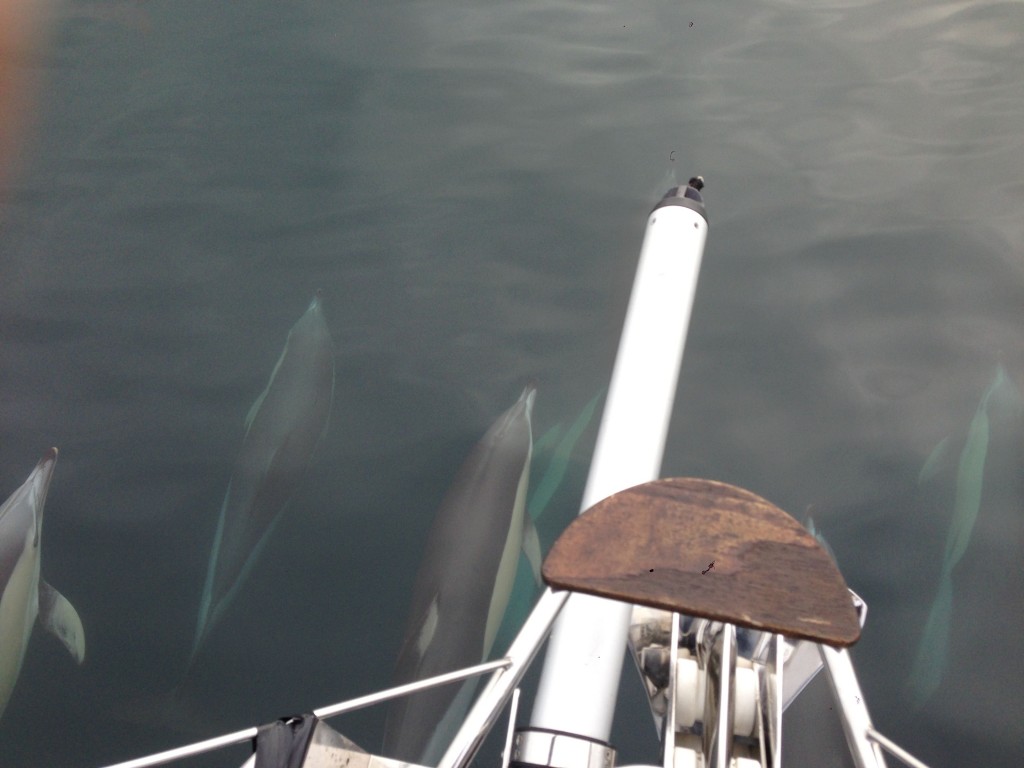 This pod of at least 24 dolphin entertained us for hours. They swam along side the boat, under the boat, behind the boat, but mostly along and in front of the bow. This is their favourite place to be. On larger ships they like to surf the bow wake. But with us, they just enjoy hanging around. We like to go up to the bow and bang on the hull, and talk to them. They  swim side ways so they can watch us, and they make their little dolphin sounds out of the water, as if to communicate with us. After about 45 minutes of this entertainment, we got a little bored and went back to the cockpit. But they hung around for another hour it seemed. Only now they were trying to get our attention and were doing tricks for us, jumping far out of the water, 3 abreast. Racing and jumping around the boat. Very friendly and intelligent creatures. Tune in later once I edit the videos for this trip, I have some amazing footage of them swimming around the boat.

It got so calm along with the right conditions for the thickest fog I have probably ever been in.  We could not see much past our bow. This fog hung around for a few hours, and at the same time, we were on a collision course with another US Warship on our bow by our AIS. There could be other vessels out there and not transmitting an AIS signal. This is where my 4 Kilowatt 48 mile offshore radar comes in handy. We have the larger domed ray marine unit, not necessarily for the range, but this larger unit will give you much better detection and definition of smaller objects, and paint ships unmistakably from farther away. I’ll simply turn it on, and set up a perimeter warning circle, and if any ship comes within this range we will be alerted. At night, I will program it, to come on every 15 minutes and do 30 sweeps and go back to sleep if it does not see anything. This will conserve battery consumption.