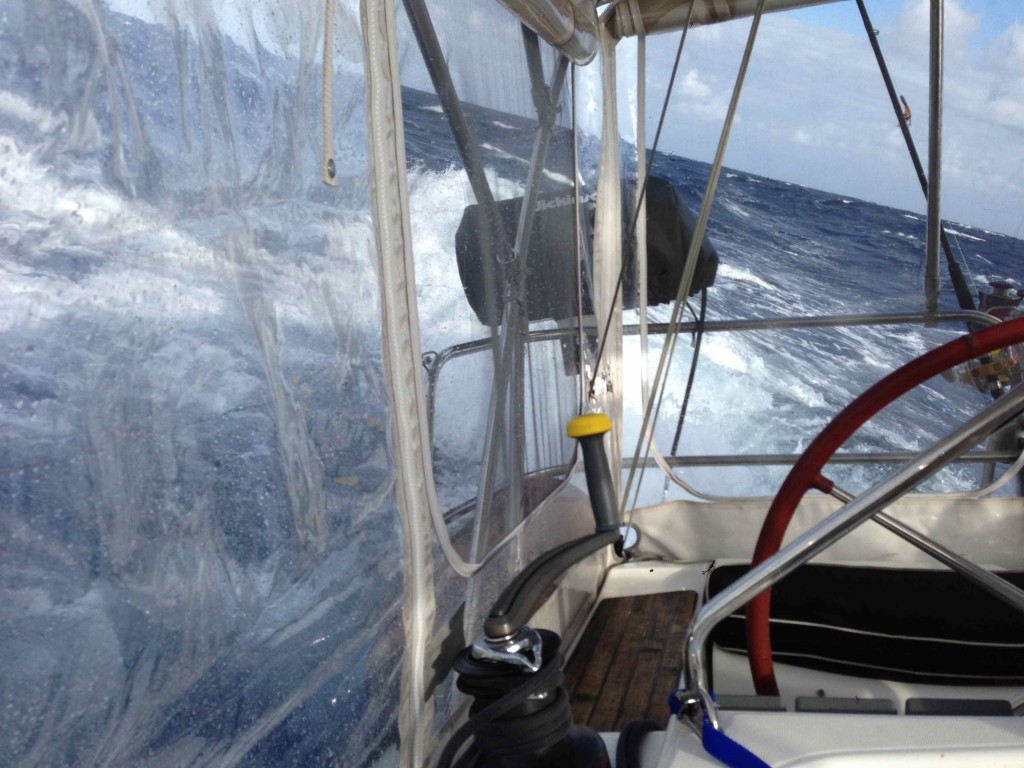 This is a small wave we are surging. No one has a picture of a Rouge wave, they come by surprise, unless you have a GoPro going non-stop.

We just got swamped by a rogue wave!

The wind was picking up and we were hitting 12 knots of boat speed. We put a reef in the main and the jib. Consistent waves/swells were coming from the port stern quarter side. It was a pretty comfortable ride. I was sitting in front of the chart plotter in the cock pit, while Archie and Ems were standing up talking about his fishing lures or something. Out of no where, from the opposite side of the prevailing waves, the starboard side, a very large  wave about 15 feet, this would be considered a small rogue wave. The danger of Rogue waves is that they come from weird directions. Your boat maybe positioned nicely, sailing the prevailing winds and waves, and then this happens. The rogue wave just road over the whole back half of the boat! It took out 4 of our dodger and enclosure windows. We did not lose any, but the stitching and zippers gave up. All three of us were thrown about 3-4 feet, I remember grabbing hold of the steering wheel and just holding on as we were swamped by this wave. I remember it happened so fast, you could not do anything, and the force was so strong. It left us sitting there soaking wet from head to toe, and the cockpit had about a foot of water in it. Our self draining cockpit drained very quickly. Later we discovered that a 1/4 of inch steel bracket that holds our BBQ on, was bent by this wave. Once we arrive, I wound a piece of 1/2″ line around it, and proceeded to try and straighten it with the winch, but it would not move at all. It seamed as if I would break the pulpit before this was going to bend back, so I left it. Amazing the power and force of nature. After this, We had no trouble persuading ourselves to always stay tethered in all the time. This happened during the day, it was nice and sunny and clear.

What is a Rogue Wave

A Rogue wave is an unusually large wave for the conditions at hand, and usually coming from a different direction than the prevailing waves. It is debatable what causes these rogue waves, until about 20 years ago scientists did not even believe mariners that these existed. They seem to be pretty prevalent around the Gulf Stream. Remember the Bermuda Triangle? This area is a Triangle between Bermuda, the Bahamas and the Cape roughly speaking. We sailed right down the middle of it. Please take a look at these three links, they are very interesting explanations and the last two are videos of a rogue wave.