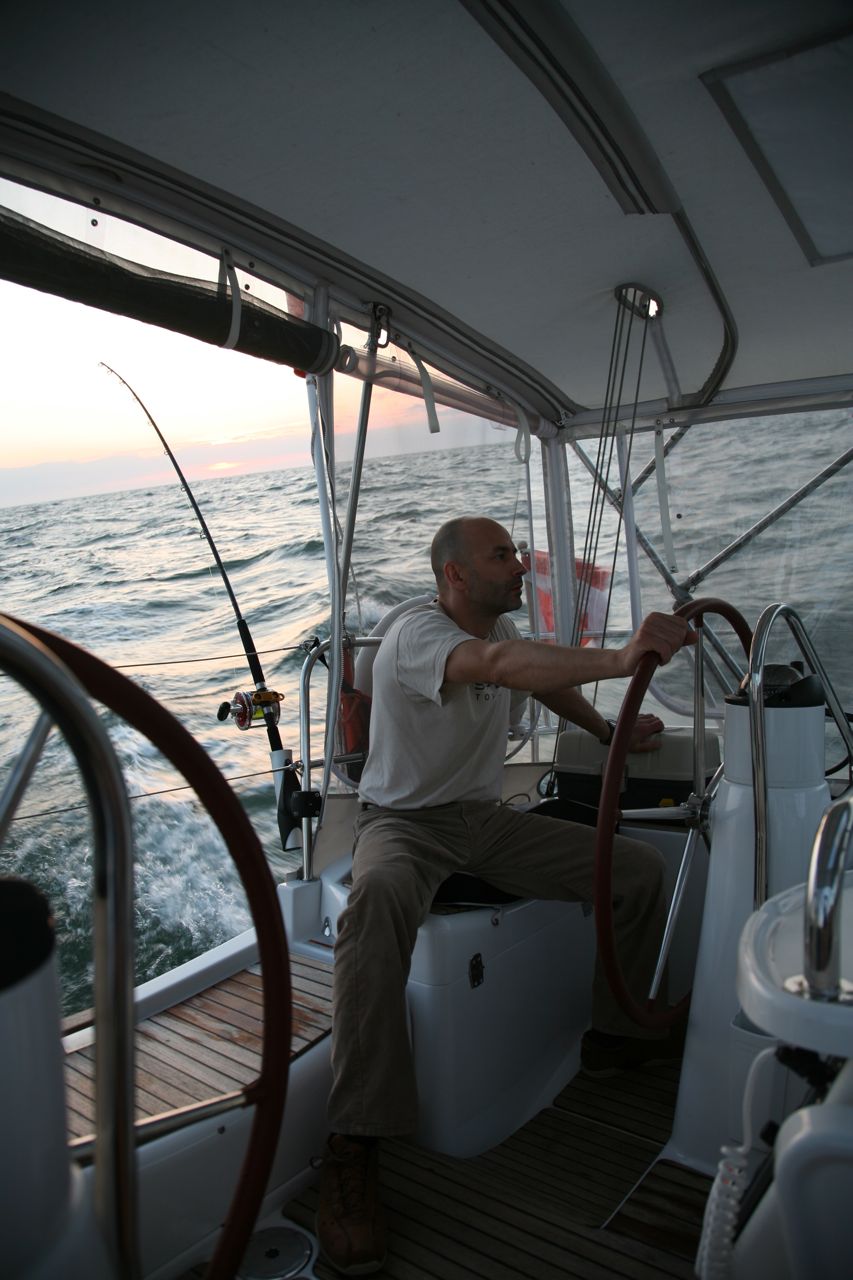 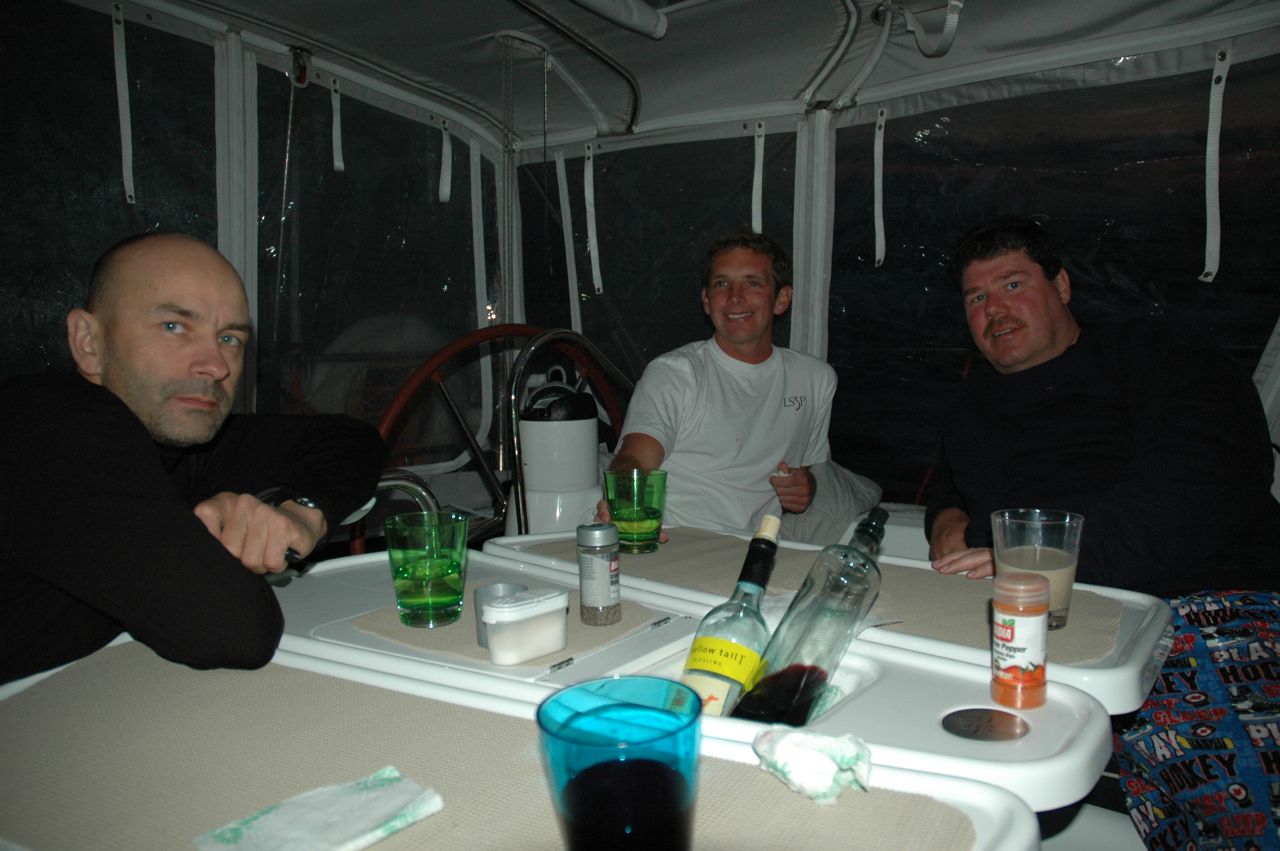 Taking in a little relax time in the cock pit while on auto pilot. 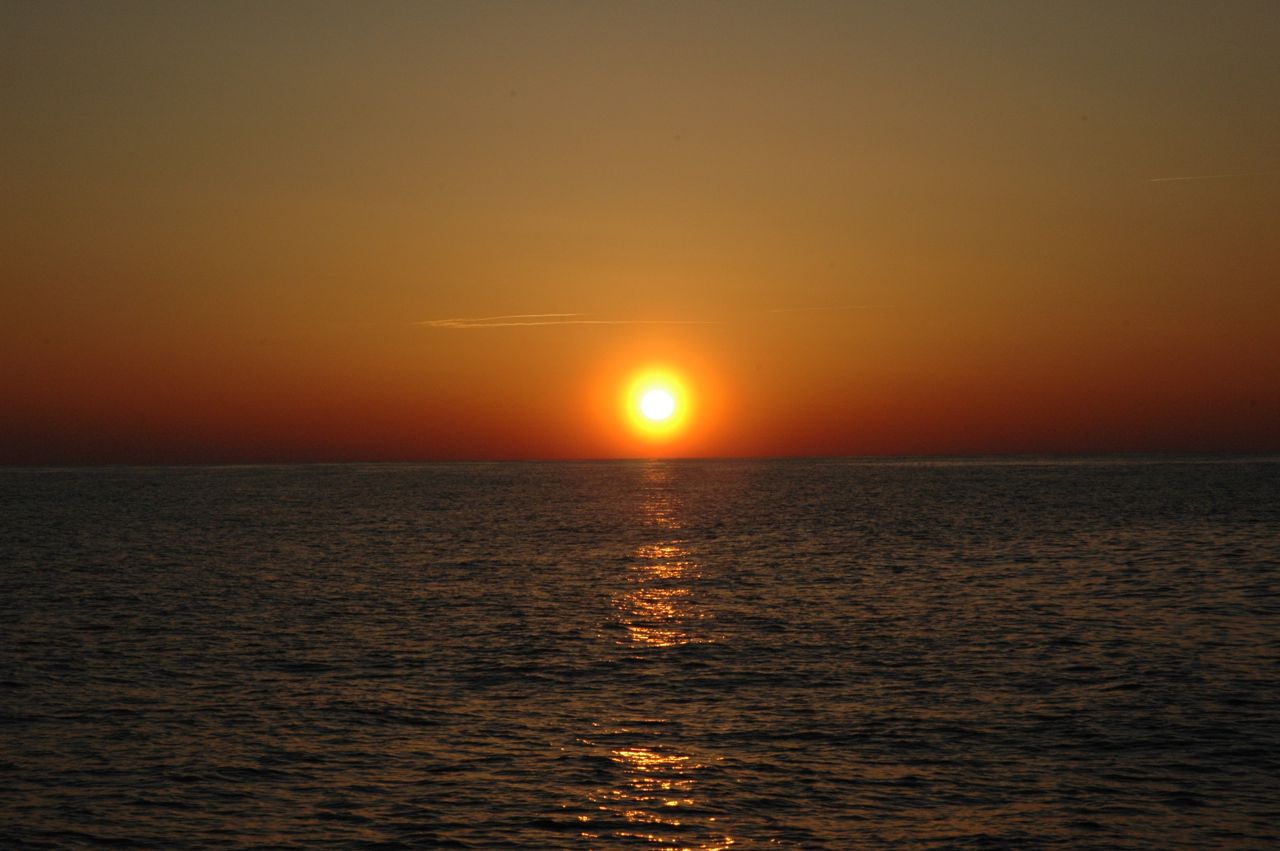 We arrived safely with no injuries or damages in New York City on Sunday Morning at 5AM. The trip started out as a wild one. Just north of Charleston about 50 miles or so, we went through a wild thunderstorm. Sustained winds of 35 knots, gusts topped out at 47 knots. That’s near 100 kilometers per hour! I can’t believe it myself. It was on the starboard quarter, we reefed earlier, and eventually completely took the main down, and double strapped it. With only a 1/4 of our furling jib out, we were sailing at over 10 knots, surfing at 13 knots. Swells were 10 to 20 feet. Luckily 30 seconds apart due to the flat seas the day before.

Now I won’t blame you if you don’t believe this next statement, but one of the 20 foot high swells and waves we actually topped out at 19.5 knots of surfing speed. Luckily that only happened once, we were not prepared for that. I do carry two sea anchors/drogues, and if that continued we would launch one out the aft to slow us down so that we would not pitch pole. Pitch Poling happens when the boat is going so fast that it actually passes the wave ahead of it, in this situation the bow could get buried in the wave, diving under water, and the whole boat could flip over onto itself in a forward cart wheel motion. Losing your mast, holing the boat, and sinking it most likely.  The boat handled wonderfully, in total control, and we sailed through it on Auto Pilot, adjusting manual overrides as needed.

The rest of the trip was not so exciting. A high pressure system moved in and we had no wind for the next 3 days. We basically had to motor for 48 hours straight. We were only able to do 5 knots, and this was very painful to deal with. We were down to less than 1/2 a tank of fuel by Atlantic City, and decided to play it safe and pull in there for fuel. 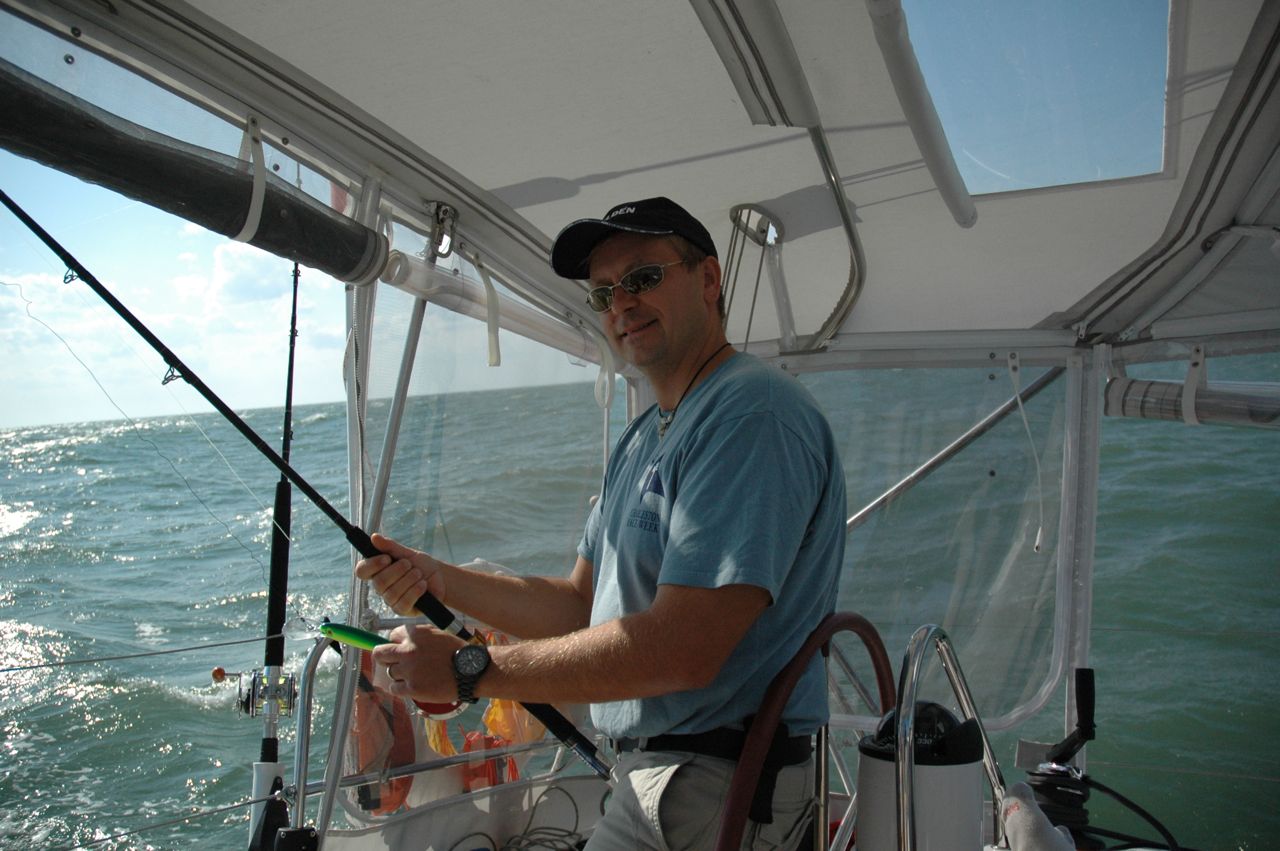 Looks like a perfect time to try some fishing!

Chris and I agreed, I had a really big one on the line!

I need Cez’s help to reel this baby in. Unfortunately we lost it, it bit right through the steel leader line. 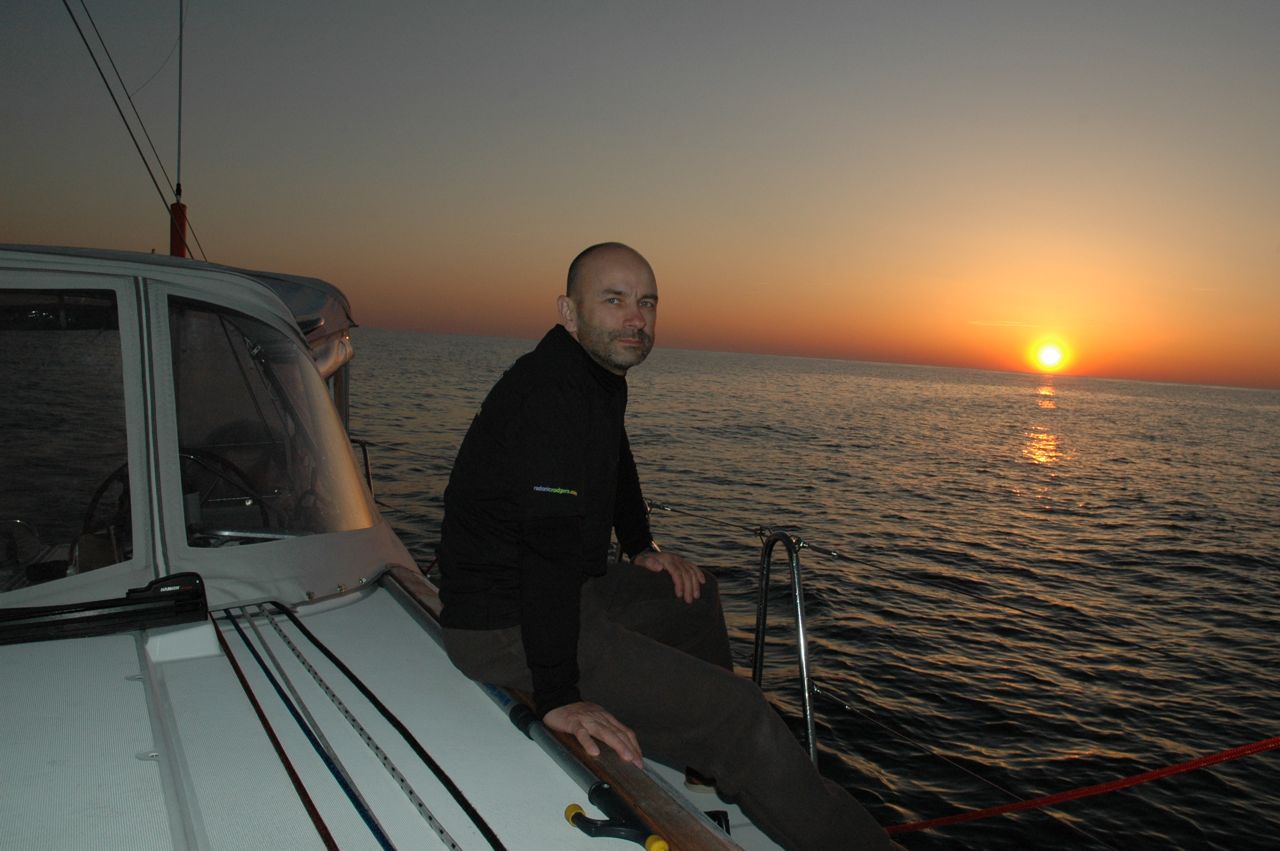 We all enjoyed some beautiful sun sets. 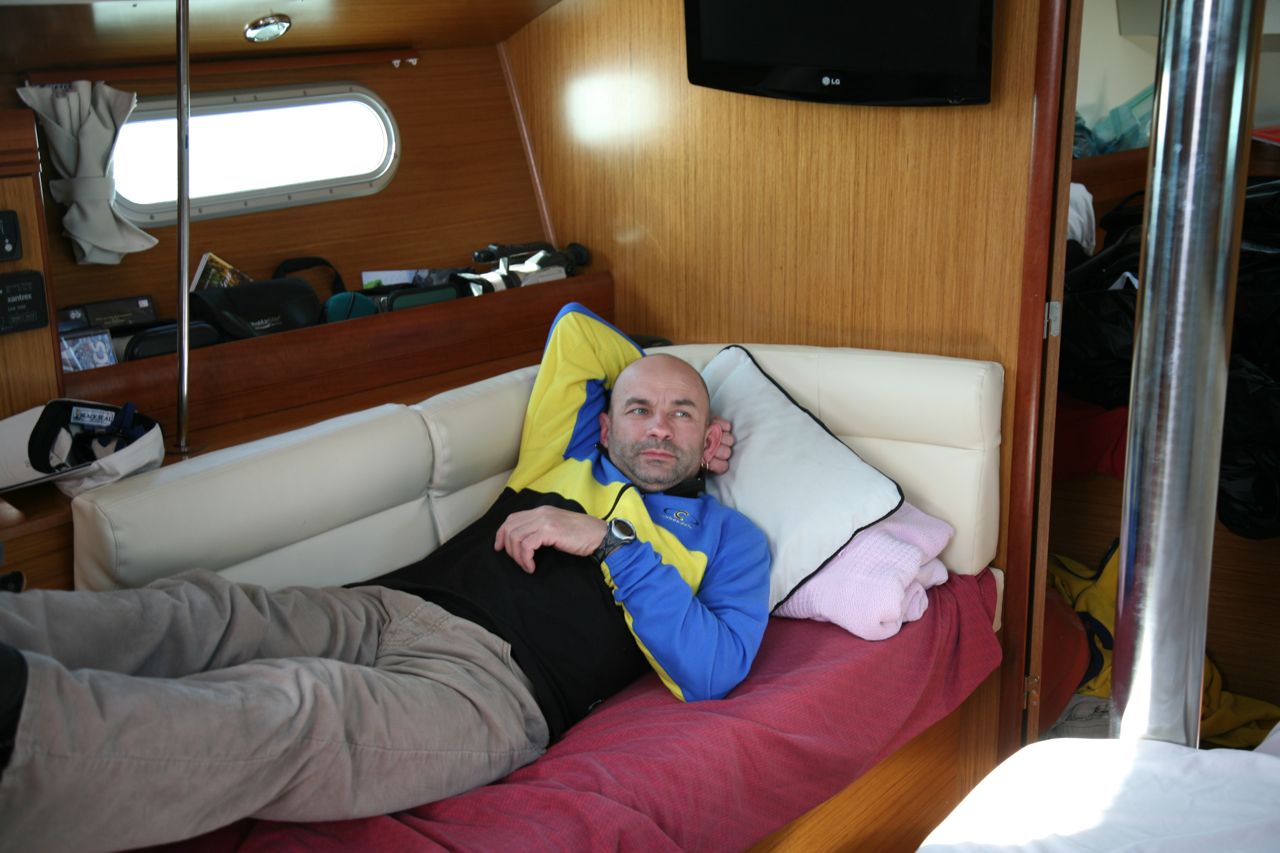 Cez’s relaxing in his usual bunk on the port side. 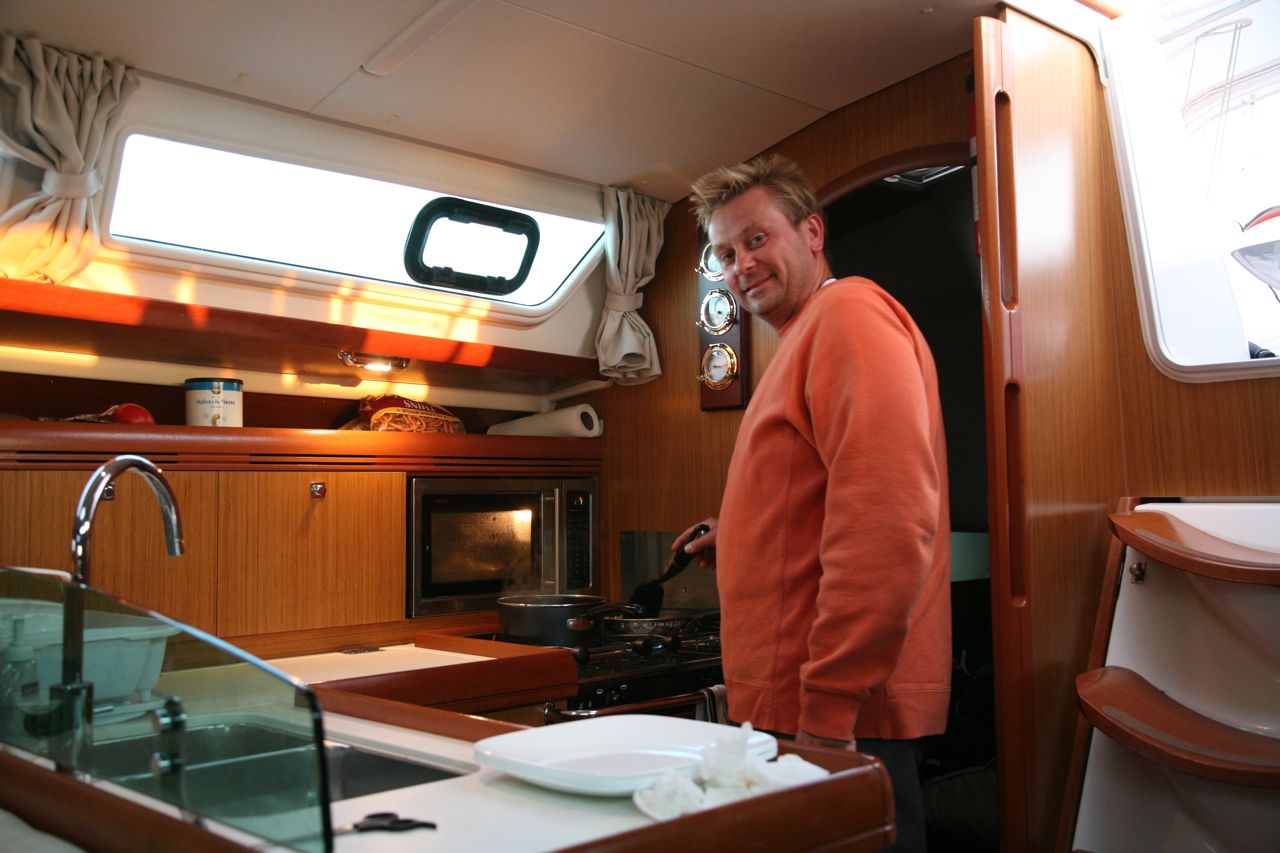 An amazing dinner, all things considered. We enjpoyed pasta and meat balls with a nice glass of wine! Herb the Auto Pilot on the helm. 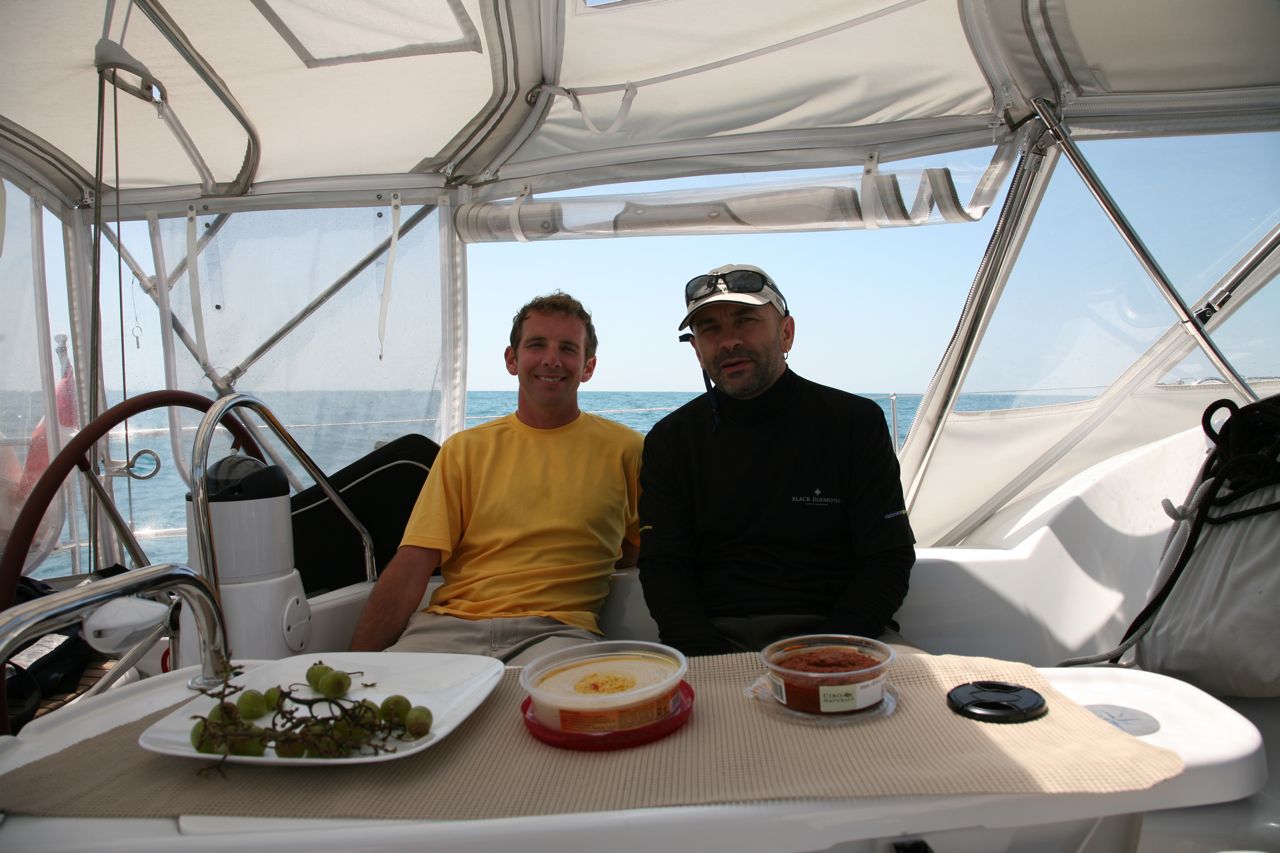 Chris & Cez having a little snack.

We arrived at 3AM, and waited for the fuel dock to open. Very disappointing city and the Trump Marina & Hotel was even a greater disappointment. I would never desire to go to Atlantic City again even if you paid me.  Anyways we wasted another 8 hours in Atlantic City, delaying our trip further. We arrived at the fuel dock of the Trump Marina & Hotel at about 3am.

We tied up there, which is a custom to do so when waiting for fuel. The sign said they were closed, which was expected at this hour. So we walked up to the Trump Marina Casino. We found very sad looking people gambling the night away, entered a little cafe like restaurant inside the Trump property. There were about 4 people on staff, 3 of which told us that they only had one waiter. The other 2 were managers, managing the one waiter, and the 3rd was the cashier because I suspect, they did not trust the manager or waiter with the money. Ohh yeah, and there was also a security guy watching over all of them. We waited about 15 minutes for service, then ordered some bagels and coffee, so did the scantly glad girls at the next table, they looked like they were also on duty, for other types of services albeit. After another 15 minutes, the one waiter came to inform us they are out of bagels. So we decided to leave, and so did the working girls.  I don’t know how this place makes any money other than the gambling. 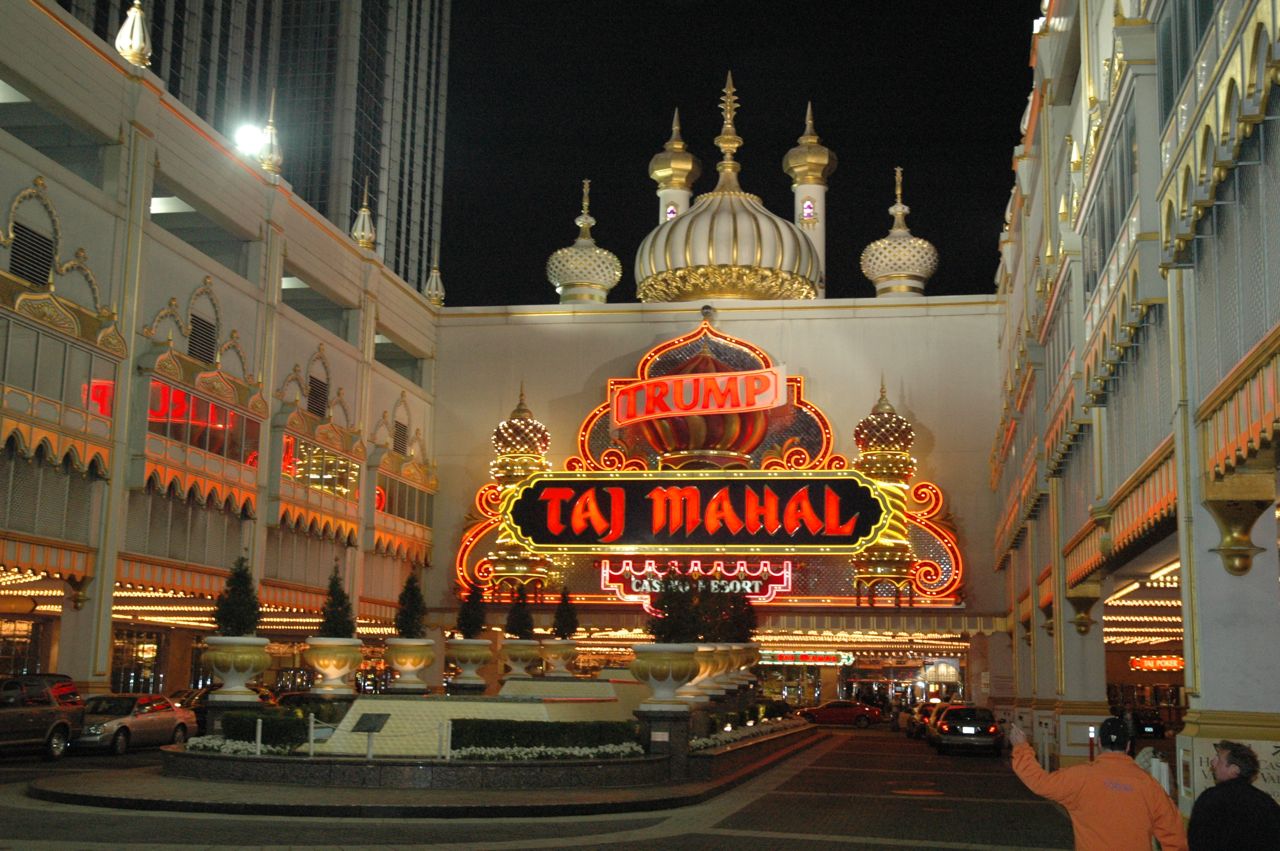 We then took a junket type bus over to the Taj Mahal, similar sort of experience, so we decided this town was not for us, we just headed back to the boat and waited  for fuel. At about 8AM, I asked the security guy when the Marina office opens, and when we could get fuel. He said he knows nothing about it, he suggested we talk to the Hotel front desk. Speaking to the Hotel front desk was a greater disappointment, they did not know that a fuel dock even existed. I said we are docked in front of it by the Marina. “Marina?” She asked. I said yes the Marina right in-front of the Trump Marina & Hotel. “Ohh, that Marina.” She said she knew nothing about it either, and that I’ll need to wait for their office to open, and she had no idea when that would be. I checked back at 9AM, then 10AM, and finally at 10:30am the manager finally decided to get out of bed and make his way to work. After waiting about 10 minutes while he chatted to some guy about nothing. I interrupted and asked when will the fuel dock open? He rudely replied, “In June!”, which is over a month away by the way. I said, “June” in shock, “I have been waiting for it to open since 3am” Apparently it’s under construction and there is a closed sign and everyone knows that, he explained. I explained to him that I was not from around here and closed to me means closed until the next morning. I suggest they put up a sign that says, “Closed for Construction” or “Closed until further notice”, or “Closed until June” etc. He again replied rudely, “Your lucky I don’t charge you for over night dockage then, be on your way immediately” I explained that I have been asking people all night about the Fuel Dock and the Marina and no one knew anything. I asked, “This is the Trump Marina & Hotel is it not?” He quickly responded, “This marina is owned by the city and has nothing to do with Trump, he just put that on his building cause it looks good.” I mumbled as I walked away, “Well it is not looking good for him now!” We fueled up across the channel, and the lady there said she had heard similar stories time and time again. The manager just shows up to work when ever he pleases. That their service is actually really good for their business. 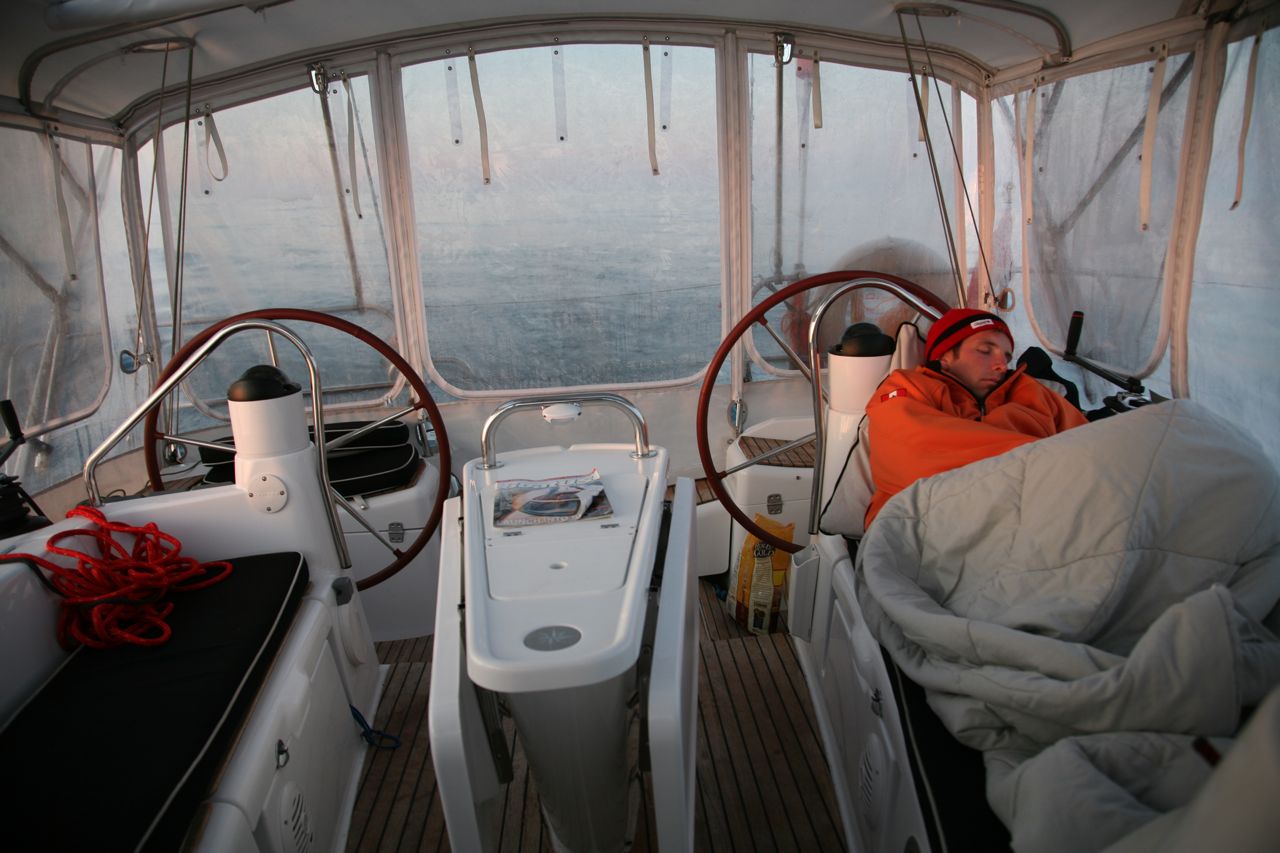 Chris past out in the cock pit while on watch. 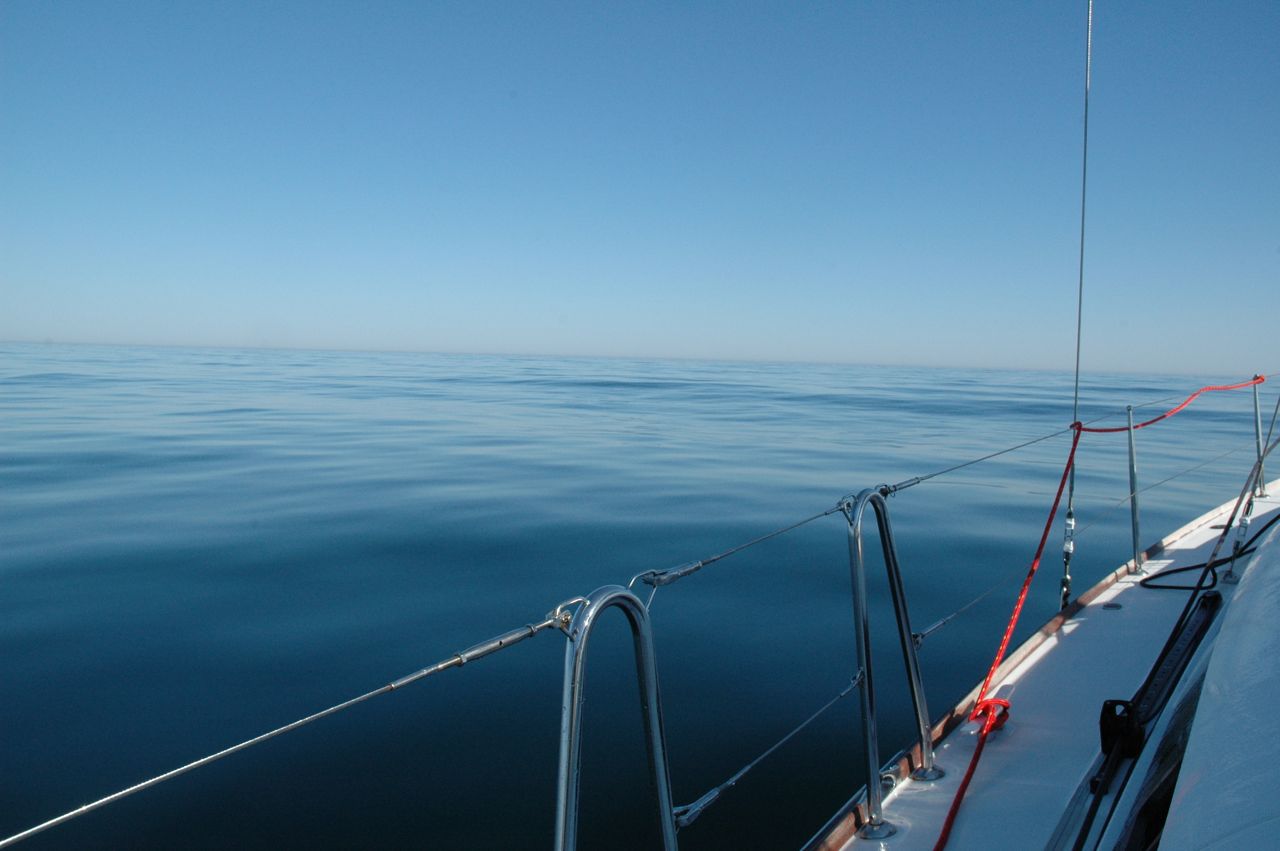 Have you ever seen the Atlantic Ocean so calm? Not what you want when you are sailing.

We thought we spotted a white tip shark about 50 miles offshore, feeding on seagulls. 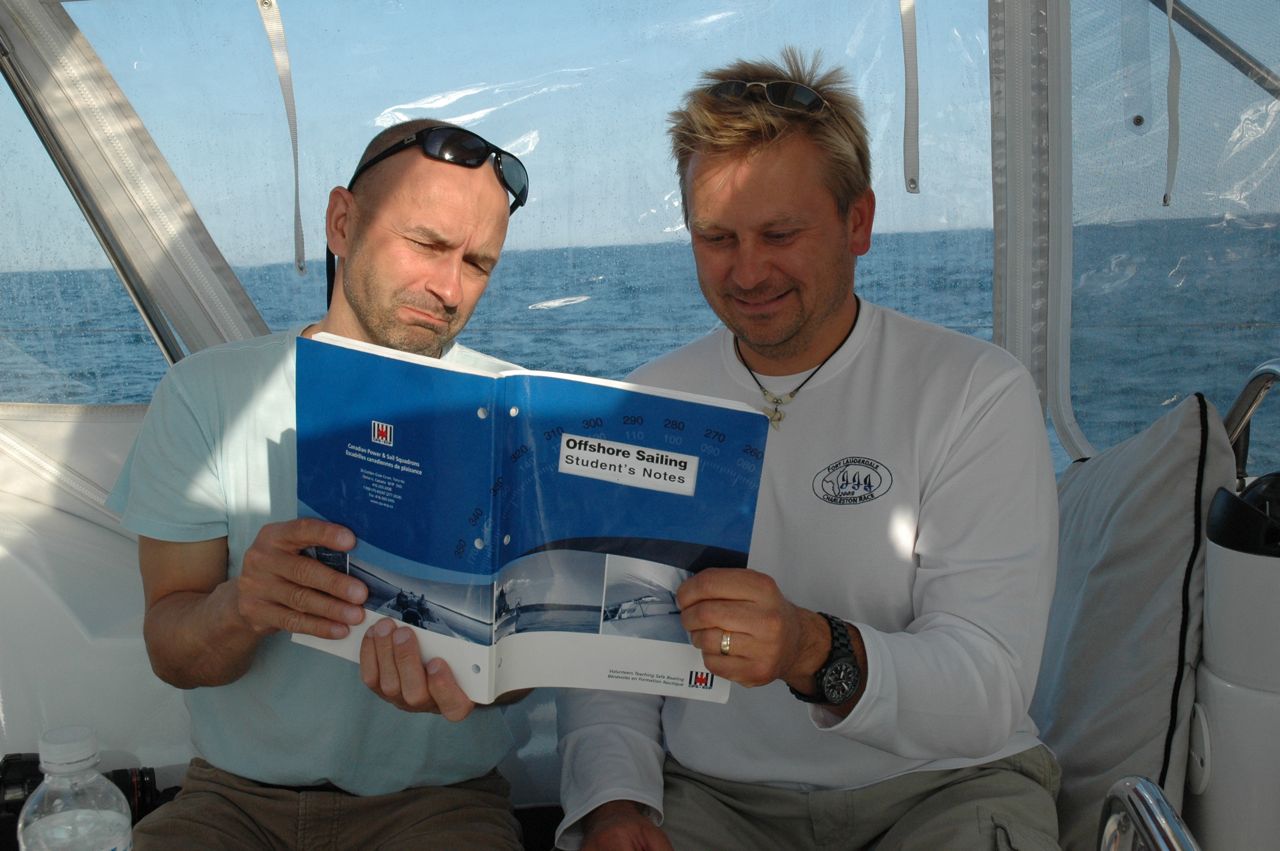 Cez & Ed studying for their CPS Offshore sailing exam while on route in the Atlantic. 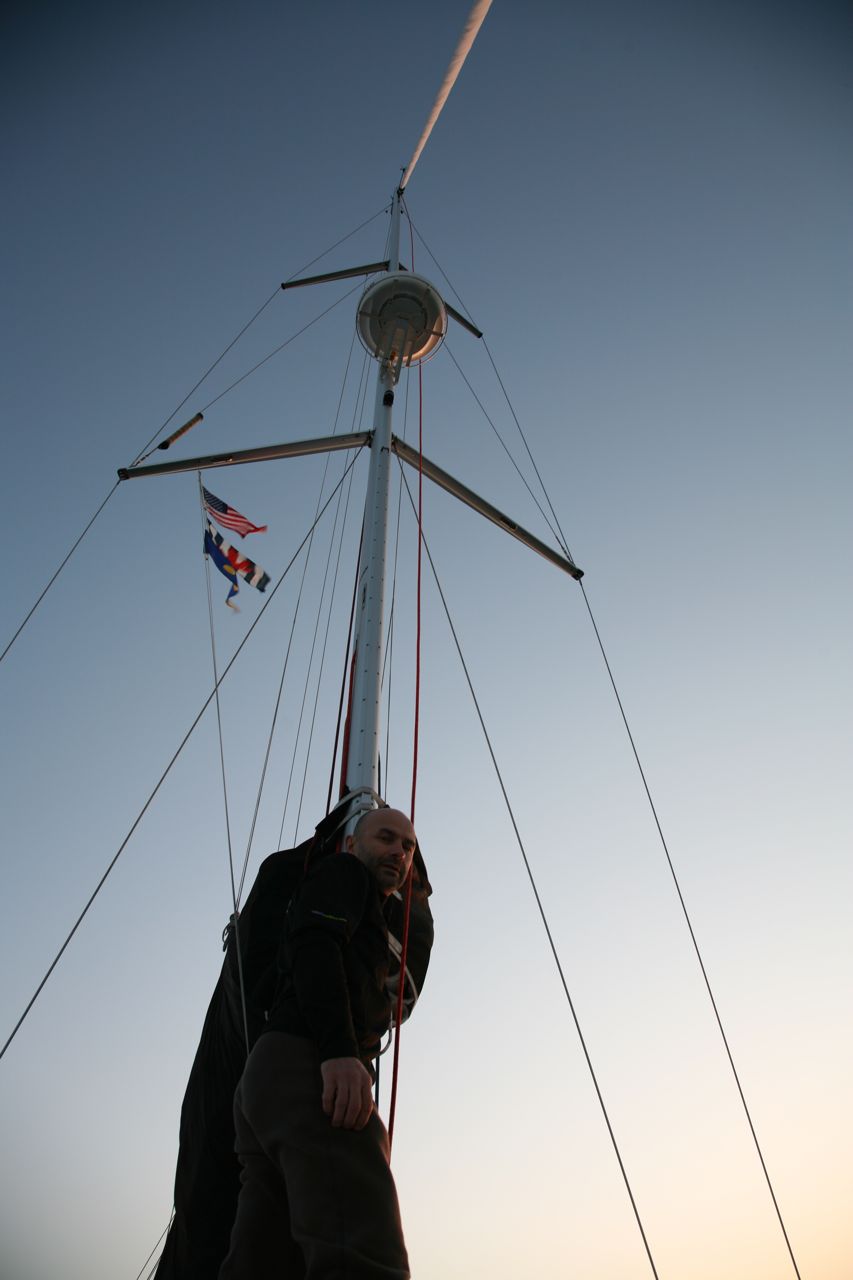 Once we fueled up, we set out. Once again no wind, there was a few puffs that lasted an hour or two. But mostly motored all the way to New York City. Arrived Sunday morning at 5AM. All in all an exhausting trip. Definitely no vacation. We all agreed that we would rather have the 40 knots of wind to deal with than no wind at all. At least that keeps us pumped and excited, and you are actually getting somewhere. All in all, we still got to New York City from Charleston in 4 days and 16 hours., including our lay over in Atlantic City. Last fall we sailed all the way to Florida in 5 days and 3 hours. Regardless, we are docked now in a Yacht Basin at the foot of the World Trade Centre Site. You can see the new construction of the Freedom Tower going up. 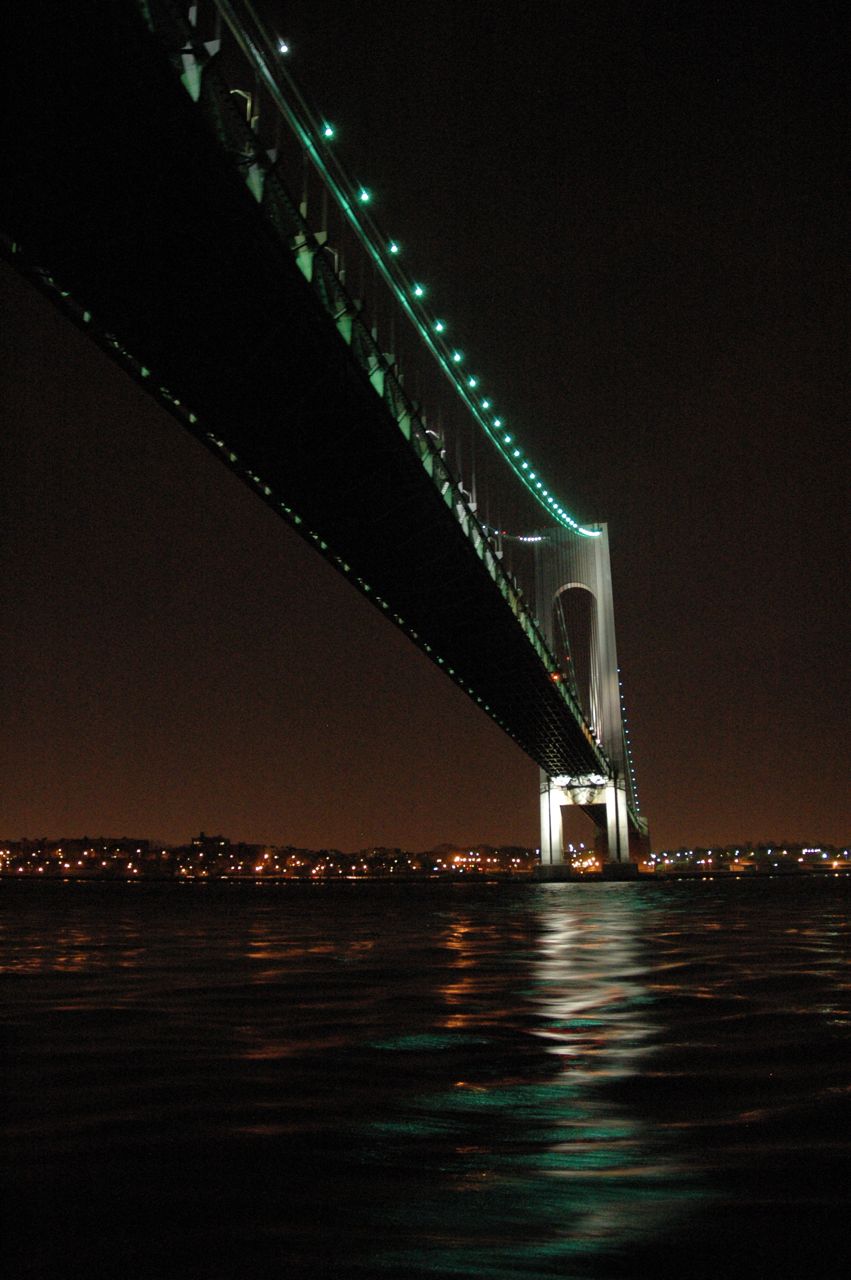 Verrazano Narrows Bridge, entering the Hudson near Manhattan. This bridge can be seen 50 miles away. (c) Copyrights 2009

The crew got off and all caught flights home today. Except for Craig, his wife surprised him! She drove down to meet him in NYC with the whole family. He got off the boat at 5AM and caught a taxi directly to their hotel. Lucky Man!

I am still stuck here, could not continue further without some sleep, and waiting for a tidal current to take me up the Hudson to Nyack, NY. Where I will leave the boat until May, when we continue up to Toronto. I’ll clean the boat up today and tomorrow, and catch a flight out tomorrow evening. 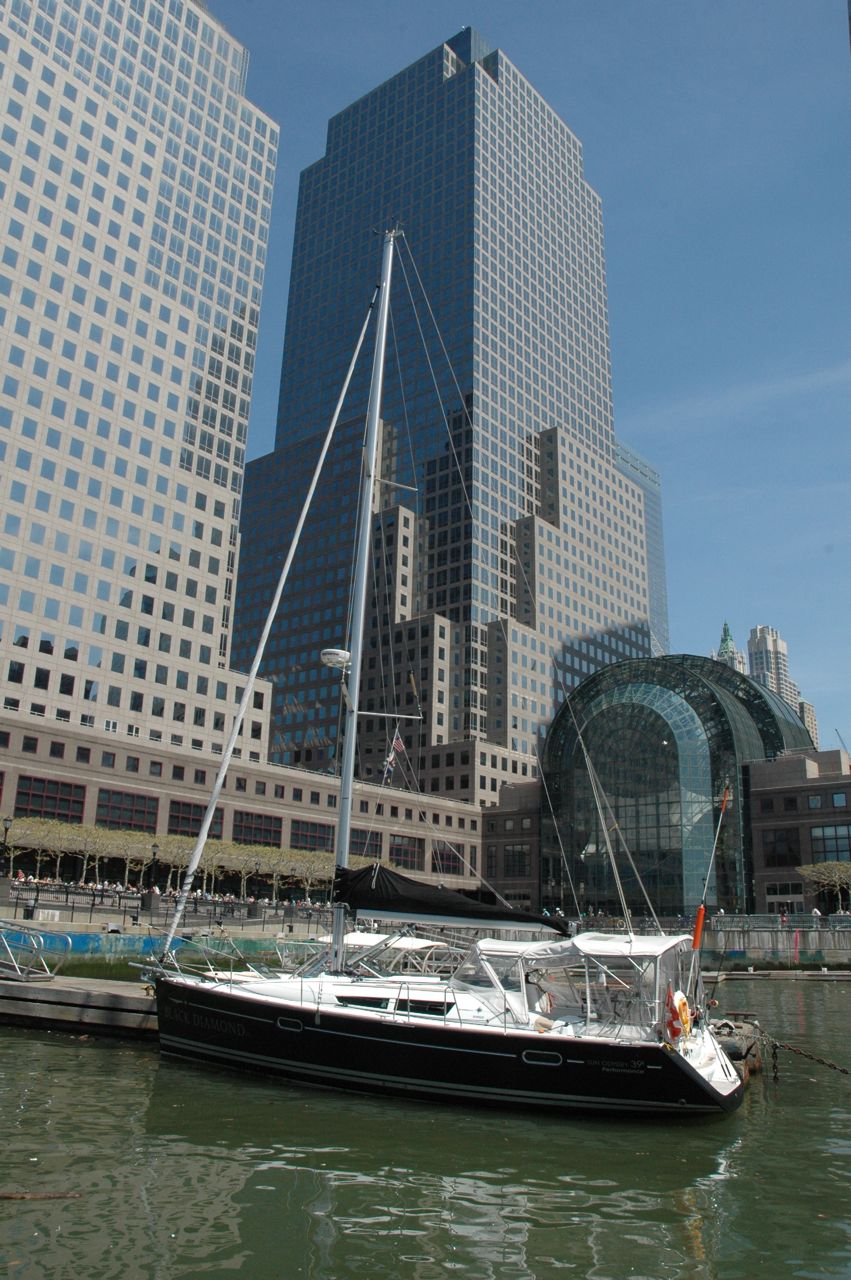 We docked at the foot of the World Trade Center Site, Financial Yacht basin.

Saw the initial construction of the Freedom Tower going up. (c) Copyright 2009