We are now providing skippered charters and yacht deliveries, including crew positions for offshore passages. 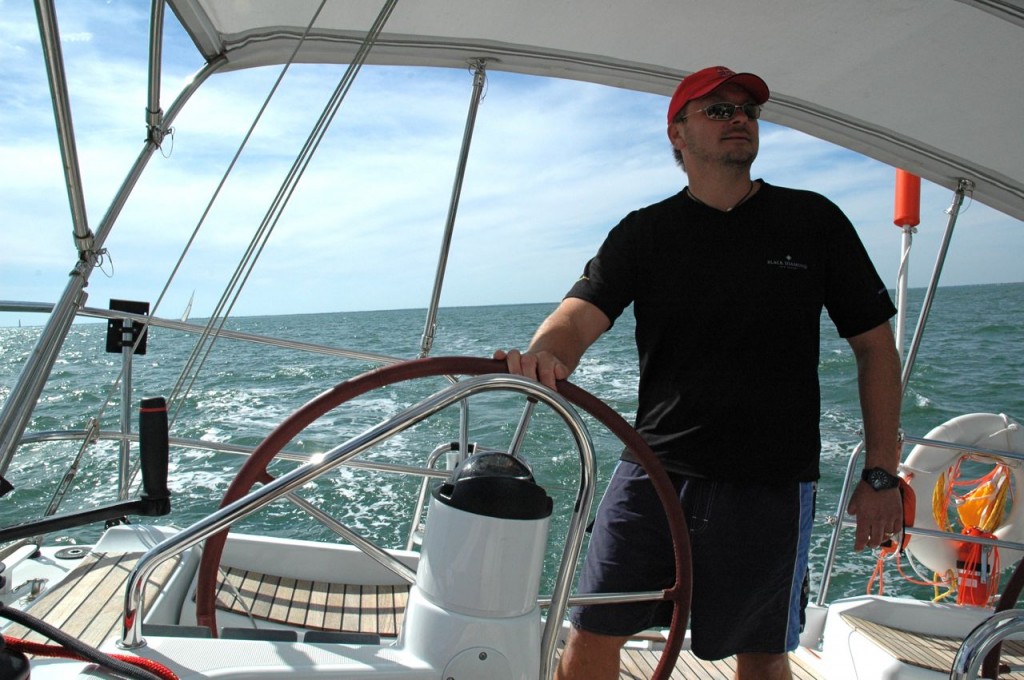 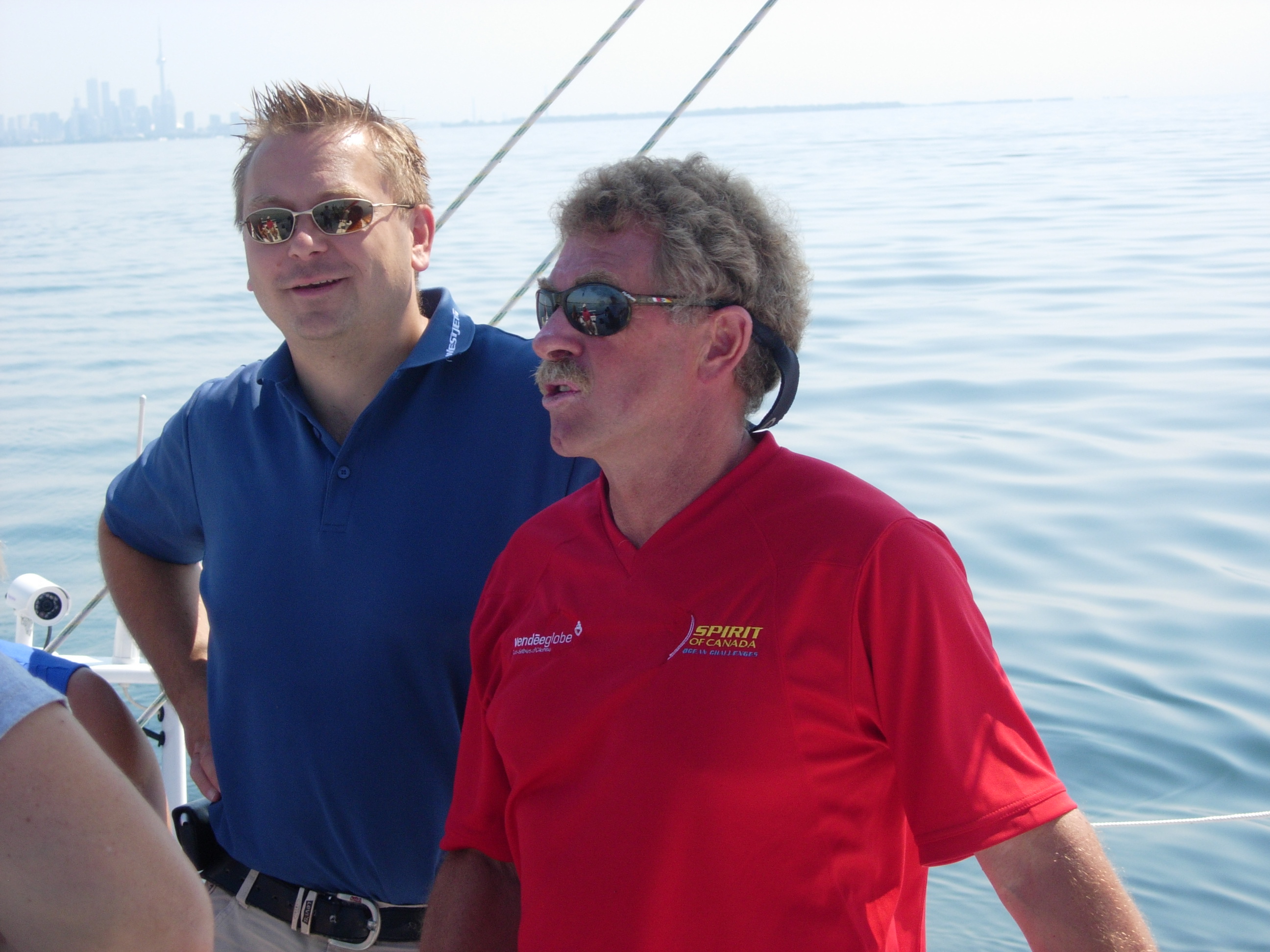 Skipper Ed, with the late great Derek Hatfield aboard Spirit of Canada an Open 60. Derek was a veteran around the world alone sailor.

Black Diamond is a Jeanneau 39i Performance sailboat. My wife Roxane and I have 2 wonderful boys, Alexander and Thomas, now 13 and 17 years old. Much of this blog was created on our first trip south when they were just 4 and 8 years old. I am currently working on updating it, with content from the last 8 years cruising with them and other guests aboard Black Diamond in the Bahamas. We have been boating ever since we were dating which is now 26 years ago and our boys were basically born on a boat. They know no other life, other than boating and cottaging in the summer months. In 2008 we decided to extend our season by heading south with Black Diamond. Our final destination the Bahamas and perhaps a little further. We are doing it again now in 2013/14/15/16/17/18/19.

I have been boating for 32 years, at the age of 51, this is more than half of my lifetime. Starting out with a number of smaller power boats, experienced with twin engine motor cruiseres. Switched over to sail 20 years ago. I have sailed various boats from windsurfers, dinghies (lasers), trailer sailors, keelboats from 26 to 45 foot yachts.

I live in the area of Toronto Canada on Lake Ontario. I have been racing yachts for the past 13 years. I have also entered many long-distance races such as the Fort Lauderdale to Charleston, completed in 2 days 8 hours, we received 4th place in division, 8 minutes in PHRF behind a 3rd place trophy. Then 6 times finishing the Susan Hood, a 75 mile over night race, 6 times entered in the Lake Ontario 300 the world’s longest fresh water race, a 308 nautical mile race around the perimeter of Lake Ontario. My crew and I on Black Diamond finished in under 2 days. Our best placing was 3rd in division, and 12th overall in PHRF for the entire LO300 fleet of almost 200 boats.

Multiple, deliveries of yachts back up to Canada from the Bahamas and the Caribbean, we entered in a few interesting races along the way, one from Fort Lauderdale to Charleston described as a sled ride up the gulf stream,  the Charleston race week regatta series and the New Year’s Day Staniel Cay Regatta in the Exumas, Bahamas. We have raced in this regatta twice now, and came second both times. Most recently, second by only 6 seconds. This was a boat for boat race, no PHRF scoring.

“Twenty years from now you will be more disappointed by the things that you didn’t do,

than by the ones you did do. So cast off the bowline, Sail away from the safe harbour.

Blue water experience include yacht deliveries of multiple yachts from the BVI’s and the Bahamas to New York City. Including deliveries of yachts through the Erie canals and the Hudson River. These deliveries are non-stop, thousands of miles. We crossed parts of the Bermuda Triangle, rounded Cape Hatteras, sailed in Hurricanes and during most of the deliveries were over 200 to 300 miles offshore, once over 600 miles offshore. The delivery of Black Diamond a 40 foot Jeanneau racer/cruiser has been delivered to New York City and then offshore to Florida and the Bahamas from Toronto, Canada. This delivery from NYC to Florida was completed 100 miles offshore, for a distance of over a 1000 miles non-stop to Jacksonville, Florida. Completed in what might be a cruisers record of 5 days 3 hours non-stop offshore. In 2008/09 my family and I added another 500 miles of sailing throughout much of the Bahamas. Spending months aboard Black Diamond sailing the Abacos, Nassau and the Exumas. I then sailed the boat back to New York, completely offshore, entered a few races along the way, and back to Toronto through the Hudson River and Erie Canal. During the 2009 season, we sailed Black Diamond off the dock 148 different days out of 365, winning the Vacant Dock award the second year in a row.

2011, completed the delivery of friends boat Tracey & Nilson Ruiz, from Tortola, BVI to New York. Tortola to Georgetown Bahamas in 5 days non-stop. Last leg from Charleston to New York over the memorial day long week-end non-stop Friday to Monday in 4 days. All completed safe and sound without incident.

2013/14/15 We again brought Black Diamond south to the Bahamas. Non-Stop from NYC to Georgetown Exuma, in 7 days. We have spent these 2 years sailing most of the Bahamas, Abacos, Exuma, Nassau, Eleuthera, Long Island, Little San Salvador

2016 Sailed Black Diamond back up to New York and then back down to the Bahamas once again.

2016 We are entered in the Miami to Nassau Race, and will be cruising the Bahamas once again.

2019 East Coast of Canada, USA, and the Bahamas

“Mission accomplished!! Worth every penny!! We are indebted to Ed for caring for our boat like it was his own and safely delivering it through the Champlain Canal and down the Atlantic coast to Hampton, VA. Ed is a very knowledgeable captain who quickly got to know our boat and helped us learn all that we needed to get started. He stepped the mast up and down, built the mast craddle and made sure all the equipment and instruments were working again. We were lucky to spend some time with Ed on the boat during one of the delivery legs and he was amazingly patient with us and helped us far more than we ever expected. Ed was very considerate, saving us money wherever he could and left the boat beautifully clean at the end, which was very much appreciated! Ed has become a friend who we reach out to first when trying to solve a problem on the boat as he always has some keen advice for us. Everyone we’ve met who knows Ed has told us he that he’s the man to trust, and after our experience with him, we agree!!”

“We purchased a boat in the BVIs and needed to have it delivered for us to the Great Lakes. That’s when Captain Ed came through for us, consulting us on the equipment and resources that would be needed and weather for the voyage among other things. He also helped us take it off-shore from BVI to the Bahamas, and accompanied us for a leisurely sail through the Bahamas with our family. He knows the Bahamas inside and out, having sailed there for the last 10 years. He really made us feel comfortable and the whole experience enjoyable.  Capt. Ed and his crew also delivered the boat offshore from Charleston, SC to New York and up the Hudson, where we picked it up the rest of the way. Captain Ed safely delivered the boat, with no issues, no damages, on time and as quoted! Now having had the opportunity of getting to know him better and followed some of his offshore adventures, I would not trust too many other people more than Ed with my boat and my family.”

“I’ve known Ed – and been sailing with him – for over three years now, having first met him in the summer of 2015 when I was looking for someone to help me take my boat from New York to the Bahamas. I had not done ocean sailing and wanted to find someone with the experience and expertise to run the crew and safely deliver the boat south.

Ed came highly recommended and with good reason. He has logged thousands of miles on multiple deep water crossings. His thorough preparation gave me and the rest of the crew the comfort and confidence needed to embark on this 24/7 sail to the Bahamas. This was not down the ICW, rather it was well offshore to get out of the Gulf Stream (flowing the wrong way for our purposes) and to head to the Abacos, the Bahamas using the most direct route. This 6-day sail went flawlessly due to Ed’s planning and blue water skills.

As a tremendous bonus, Ed also knows the Bahamas like the back of his hand.   I have spent the last three winter seasons cruising there and relying heavily on Ed’s guidance around the best harbours, and the best ways to navigate in the perilously shallow water that encompasses most of the 700 islands in the Bahamas chain. Ed has an inexhaustible store of knowledge about the Bahamas and he seems to have friends strategically placed near every great bar/watering hole across the Abacos and Exuma!”

“If you are considering a charter in the Bahamas then Ed is 100% the best Captain for the job!”